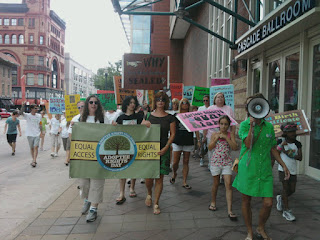 Although I’ve always considered the Dayton, Ohio area my true home, the fact is I had a home before this one. In 1965, I was born at Evanston Hospital in Evanston, Illinois and my first mother lived in a maternity home at The Cradle awaiting my arrival. She describes this time as positive and a time to bond with the other soon-to-be-moms. I am thankful that she had a positive place to go through a traumatic event and even had a couple funny stories to share with me from that time period.

I was placed into a closed adoption. For those of you unfamiliar with closed adoption, it basically means through a process of sealed records, I was not allowed to know anything about my original family and they knew nothing about me. My first mom was treated like a criminal in an emotional sense. Never told if I was o.k or what had become of me.

I have never been back to Chicago as an adult. The place holds so much emotional significance for me that I have avoided it for a long time. When I heard the National Conference of State Legislatures (NCSL) convention and Adoptee Rights Protest would be in Chicago this year, I knew I had to attend. Besides meeting and re-acquainting with the hundreds of amazing and awesome adoptees I’ve met via My Space and Facebook, going back to my original home holds so much significance to me that I consider it the closure I need to complete my adoption journey.

I lived at the Cradle for the first 2 months of my life. I was described as “the happiest baby in the Cradle”. I often wonder if that was true, but my parents assure me it was. My caseworker was Mrs. Magee, a delightful woman according to my mother. Another delightful woman, Nina Friedman, helped me find my first mother in 2006 in one week. I hope to meet Nina next week and re-visit my first home.

I was fortunate my first mother was alive, easy to find due to an uncommon name and also willing to meet me. I was also fortunate that she was willing to fill out the voluminous paperwork required by Vital Statistics of Illinois in order to receive my original birth certificate. I received my birth certificate through this “loophole” as I call it several years ago, before Illinois opened their birth certificates to the majority of adoptees in 2011.

This birth certificate means everything to me. (I proudly post it on my Facebook page if you want to look at it). Mainly because I was told my whole adult life I had no right to see it. But also because it is documented proof of who my first mother was, that she named me and that I actually was born in a Hospital (not a cradle as my childlike mind always believed). I never knew where I was born until I was 40 years old. My second amended birth certificate wiped out this information. I never knew who gave birth to me until I was 40 years old. Never looked at a picture of a face resembling mine until age 28 when I had my son. It’s an admittedly odd way to grow up, but it’s the only life I’ve ever known and I value it. Through reunion with my birth family and bonding with other adoptees, I have come to accept myself and life story as God’s plan.

I feel very blessed to have grown up with an adopted brother and been close to several adoptees. My two closest friends growing up are adopted. One has found her family. The other has no interest. I respect both choices. Some people on the outside may think adoptees are fanatical, angry and unstable. That is a perception I would like to change. I don’t fit into that mold and I know that the majority of adoptees do not either.

The only thing I am fanatical about is that adopted people have the same rights as every other citizen in this country . . .to have a copy of THEIR ORIGINAL BIRTH CERTIFICATE. That is what this protest is about. Education. Adopted people should not be held to a different standard than other citizens just because of a circumstance as children we had no control over. Some of us want to find our original biological families. Some of us don’t. But we all deserve to have our original identity and the narrative of our lives.

I consider it a true blessing and honor to be able to stand together with my fellow adoptees and educate the legislature of these much needed changes.

Looking forward to sweating beside you in the streets of Chicago!
Posted by Lynn