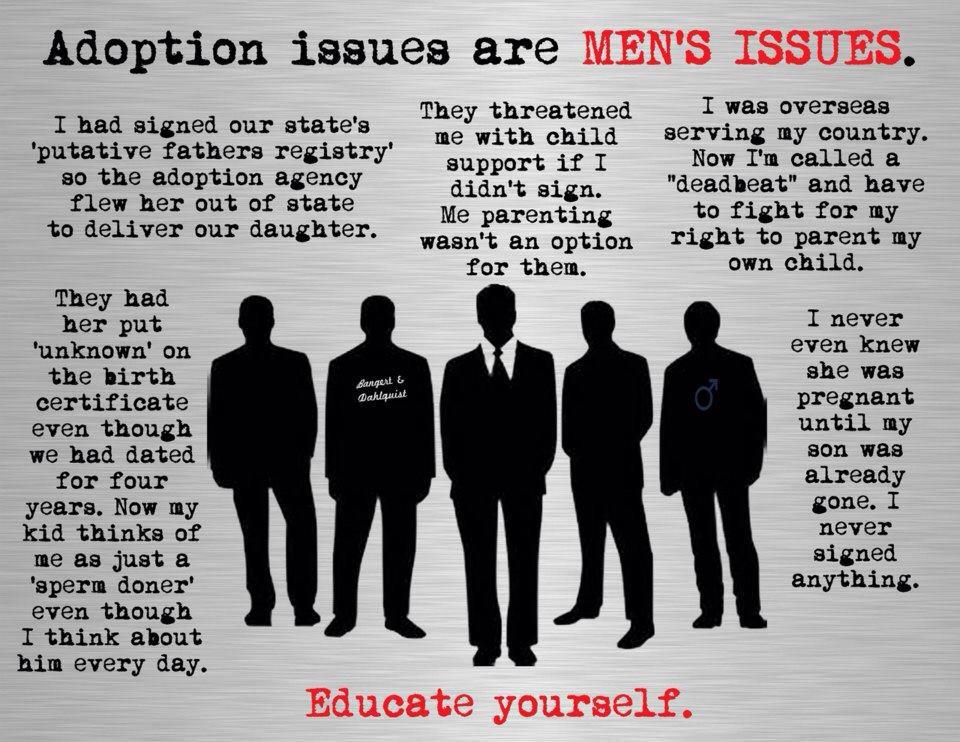 You would think in 2013, that father’s rights would have progressed farther than they truly have.

When it is still possible for a married woman to leave her home state, go to Utah, have a baby and relinquish the child for adoption (with the full support of an adoption agency) without the father knowing, there is something wrong in adoption.

Fortunately, in the case of Terry Achane, the father was able to get his daughter back (go here for more on Terry Achane) after much litigation with the adoptive parents.  He is surely in the minority.

How many Terry Achanes are there in this country who were duped out of their child?

How many men are walking around without even knowing they were fathers?  I’m certain more than any of us would like to admit.

The image of the dead-beat dead is alive in well in the U.S., even though fathers across the country tell stories of how they mourn the loss of children they never knew of until years later. My husband said this morning, that if a father is willing to open his wallet, then and only then is the man considered.

During the Baby Scoop Era, it was common for mothers to relinquish children they never told the father’s about.  This was accepted as common practice.  But in 2013?

Many men, when they father a child out of wedlock, soon receive the child support paperwork by certified mail.  But what about the men who never receive any paperwork?  Or phone calls from former girlfriends?

In my home state of Ohio, as well as in a majority of other states, the burden is on men to know if they fathered a child.  Even if they don’t know.  Even if the mother lied or left the state.

Terry Achene had an advantage:  he was married to the mother which made him the legal father.  He also hired a lawyer to fight for his rights.

There is an urban legend that all a father has to do to protect his rights is to sign the birth certificate.  When you consider how many incorrect fathers have signed birth certificates, I wouldn’t bet your rights on that.  It’s a good start, but there is more expected.

First a father must know he has fathered a child, support the mother (and indirectly the child) and then also support the child when born.  This support should be documented (money, food, clothing, visitation, etc.). If a father has not supported the pregnant mother or child, it is considered abandonment.  (This is true in Ohio as well in step-parent adoptions when biological fathers have made no contact with their children for a year.)

Second, a father must establish paternity in a Court. Just because you believe you are the father does not give you any rights.  You have to put your money where your mouth is by making it legal.

Most people have never even heard of this registry where men are expected to register the women's names with whom they have had sex.  It is a legal mechanism to either include or exclude potential fathers in notice of an adoption proceeding. ORC 3107.062  Just because you receive notice, does not mean that you will be able to stop an impending adoption.  (go here for more specifics in the law).

Unmarried fathers have many hurdles to jump if they do not want their child to be adopted.  It is best if you hire a competent attorney who specializes in adoption and/or father’s rights as soon as you are aware that you have fathered a child if you want to protect your rights to your child.  Not knowing is no excuse under the law.

For address information about the Putative Father Registry in your state, go here.