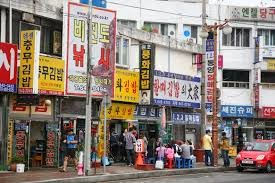 There are about 200,000 Korean adoptees spread all over the world among these very few adoptees manages to find their birth families to begin with. Interestingly records says that are about 500 KADs that reside permanently in Korea and about 2000 visits annually.

It was only last year that the Korean government finally signed the International Hague convention. Korean adoptions begun as a relief effort to help Korean children orphaned from the war to find new parents and homes. The new adminstration says that they agree and promise to support adult adoptees searching for their birth parents but also protect the rights of the adoptive families and birth parents. Except for the 80s most Korean adoptees was born from single mothers and today it remains the biggest reason why Korea still continues to send their young ones overseas...

As a female adult Korean adoptee, I confess that I have a special place that I escape too - and because I'm an inter country adoptee it means my mind hides overseas - from time to time. I have begun to second guess myself a lot lately.

I will let you all in on a little secret of mine, I still dream of living and working in Korea. Sounds pretty crazy, right? Why would I like to give up a future in a safe and secure country who haven't been to war for 200 years in exchange for a future in one of Asia's fastest growing economies.