Does treating adopted children as commodities lead to disregarding their right to privacy? 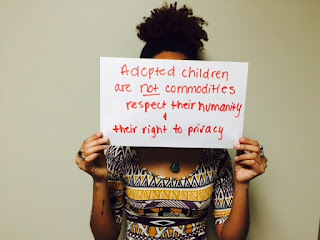 A friend sent me a link to an adoptive parent's blog where there is a call out for a new family, "preferably Christian and married" for an adopted boy from Ethiopia. Before detailing the qualities of the child, called "N", they cautioned that the new family should not have other children younger than him. They also cited that “N” needs a family who is willing to help him continue his healing journey. (I am not including the link because I’m not interested in giving this blog publicity).

I cannot wrap my head around individuals who claim to love children but then are also willing to help “advertise” fellow adoptive parents’ who are trying to give up their adopted child online, whether through legal or illegal means. HOW IS THIS OK? Not only is it appalling because of the damage and trauma that this child will likely re-live by being abandoned a second time, it is also extremely disturbing that people are liberally advertising giving up adopted children on a blog. The fact that they are doing it so openly means that they are doing it with moral certainty—meaning they judge this to be a good idea. This is unethical besides being completely and utterly dehumanizing. Are adopted children products to be marketed? It definitely appears this way at times.

I have also come across another organization (Second Chance Adoptions) which profiles adopted children looking for new families on their facebook page. Reading their profiles gives me the impression that they are selling a product—but this product happens to be child...a real sentient human being that has feelings and a right to privacy and protection. Seeing such advertisements and adoptive parent blogs (and books) where they detail private information about their children’s struggles and their adoption stories is mind-boggling. Again, why do you think it is OK to tell the whole wide world on the internet, about your children’s personal issues? Is it not your child’s right to share his or her story when they are older— when they have processed and digested their experiences? Children are brilliant and sometimes more mature than adults, but they are also innocent and need to be protected. What you post on the internet is traceable and permanent (meaning you cannot take back what you share). I often think about how this exposure will impact younger adoptees as they grow up and become adults—what will they think about this information being public and how might it affect their personal or professional life in the future? It might sound far-fetched but it is not—be mindful of what you post on the internet about your children, whether adopted or not.

Adoption is a traumatic experience to begin with—adoptees deal with this trauma differently and it manifests itself in various ways (sometimes unseen to family, friends, peers) at different stages in an adoptee's life. It is really appalling that families who choose to adopt, do so without doing their research and educating themselves on the potential difficulties and complexities of adopting a child, especially a child of color. Or perhaps they do their research but underestimate how challenging adoption can be. In any case, it is truly heartbreaking to see so many children being abandoned a second time because their adoptive parents cannot "handle them" and choose to give up, especially because there are quite a few resources available for adoptive parents these days--there are a myriad of good books on adoption, written by adoptees and trustworthy adoption professionals besides online support groups. Unfortunately, most adoption agencies do not offer adequate information and training sessions to prospect parents (which would ideally include a segment on privacy and confidentiality), because if they did far fewer families would be adopting because they would realize that adoption is complex and not for everyone. Being well-intentioned (i.e. wanting to care and love an “orphan”), is not enough. Adoptive parents need to be able to assess whether they have the emotional and psychological strength to adequately care for an adopted child as well as tools and resources (including a network of people) who they can rely on for advice and support. I also think it is extremely important, if not, paramount that the child have adequate support and regular and constant access to members of his or her cultural or racial community. (Note: I’m talking about adults, NOT other adopted children—how are other adopted children who are in the same circumstance, a source of real support? They need role models and a connection to their roots and culture which is done through connecting them to their community, which is also the adopted parents' community by extension!). I think that if adoptive parents (including prospective parents) were better informed and willing to listen to adoptee advocates and other trusted adoption professionals with an open-heart and mind, there would be less suffering for younger adoptees and future adoptees.

Kassaye is an Ethiopian adoptee who lives in Montréal, Québec. She is the co-founder of Ethiopian Adoptees of the Diaspora and is currently working on an anthology entitled, Lions Roaring Far From Home featuring the voices of Ethiopian adoptees from North America and Europe.

For a very long time-years in fact I allowed my family or more importantly parents to project their personal fears onto me which cast a shadow in my own life. Restricting me, keeping me from my own happiness-but not any longer. Their fears say more about who they are their mistakes, memories or opinions should not be an obstacle in my very own and real life.
I do love my mum and dad tremendously, yet I am not them and should not strive to be.

I realize that my failed reunion affected my mum and dad more than they like to admit and their bad experiences or as mum like to call it "her worst fear" came true it is just like they now believe all Koreans are like mine. Which in this case means greedy and money hungry, but I cannot fault them even if I try to. They are my flesh and blood and I love them despite everything.

Because of my own background I am very curious and eager to learn more about Korea and it's culture, I do even consider moving back to Korea - I told my parents this once. Now I rarely mention it because my parents wants me to learn from my mistake and move on with my life. They don't know that that thought and idea still isn't abandoned by me...

I think neither of my parents can fully understand what it means to grow up around people who don't even resemble you... I do want to find love and start a family with children that not only resembles me but that actually share a genetic connection with me. To me that is important-I won't lie anymore...

That's why I strive for finding a Korean man, to me that is of utter importance and I recently begun to date just such a guy. I will not allow myself to acknowledge potential problems before I really need to I will instead try to see it as oppertunities and possibilities. Why should my sister's difficult and strained marriage have to become my faith as well, why should my relationship neccessarily end in divorce just because my oldest sister did just that?

I will take a chance at life and happiness, and not stay behind closed doors hiding in the shadows as my life pass me by...

Elle
I'm a Swedish KAD.I happen to have a genuine but not unique interest for Hallyu especially but also other Asian related things.
Newer Posts Older Posts Home
Subscribe to: Posts (Atom)