Okay, you probably think that I'm going to write some long-winded essay on the many trappings of being a female adoptee with four parents. A veritable "parent trap" of major proportion. But ha! I fooled you. I'm actually going to write about the beloved Disney movie titled, yep, "The Parent Trap." The Hallmark Channel recently ran a double feature of the original 1961 version followed by the 1998 remake. I watched both. Couldn't help myself. And during both viewings, I thought about how this movie impacted me as a young female adoptee.


Being a Lost Daughter of a certain age, the original version staring the fabulous Hayley Mills (younger folks might remember her from her days as Miss Bliss on "Saved by the Bell") was a childhood favorite of mine. The premise of this movie is completely ridiculous. Sort of. Two girls who look exactly alike meet at summer camp only to discover that they are identical twins.They soon realize that when their parents divorced, they each took a kid. It then becomes apparent that nobody on either side of the family mentioned, or wondered about, the missing twin. But who cares! All the girls end up thinking about is how to reunite their parents. So they--wait for it--decide to switch places and go home to the other parent after camp ends with the goal of getting the parents back together. Get it? It's a trap! To get the parents back together! A parent trap!

Anyway, Disney magic and suspended disbelief aside, something struck me as I watched this former childhood favorite film. I remembered how I felt when watching it. That could have been me. Really. It could have been. I attended sleep away camp and I was adopted. It was entirely feasible that I could have been strolling lakeside while waiting for the dinner bugle to sound under the late-afternoon Vermont sunshine and happen upon my identical twin. Back then, I imagined what it would be like not only to see someone who actually looked like me but who looked exactly like me. In my adopted girl fantasy version, however, my twin was living with both of my biological parents who lost me when a freak thunder storm broke out while we were camping and I simply vanished.

Hey, it could have been true. And something tells me that non-adopted girls did not conjure up the same fantasy with complete certainty that it could actually be real. But I was an adopted girl. So I really believed it could happen. I dreamed that one day I would be reunited with my sister and my parents and would never feel lost or alone again.

As a young girl, I identified most with the twin who lived with the father, Susan. She was a tomboy and had short, blonde hair. Just like me. She could have been my sister. Then again, anyone could have been my sister. Or one of my parents for that matter. But I wasn't allowed to know anything about the people who brought me into the world. I wasn't allowed to know anything about myself. So the best I could do was make it all up, Disney style. 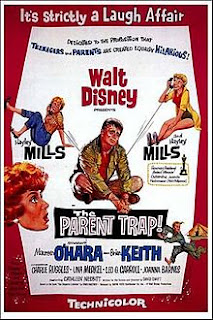