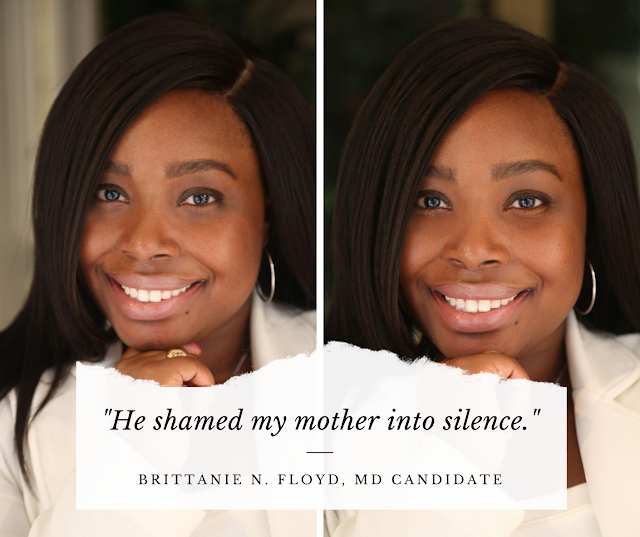 Did you ever say, "My brain works differently than yours," to your parents? I remember saying those words to my adoptive parents, on more than one occasion. I tried to get my meek and long-suffering mother to understand my bold boisterousness. I tried to ease the frustration of my mathematically-gifted father as he pinched the bridge of his nose during one of our many late-night homework sessions. I went into mental health work in large part to prove that there is more than one way to understand people. Even, to prove to myself that there were legitimate ways to understand me.

I thudded the table YES when Ms. Brittanie N. Floyd responded to my interview questions mentioning a similar struggle. "As a child, any attempt to explain to my parents that my brain just worked differently and that I was trying was met with resistance and disbelief, she said. “Brittanie, we know you are smart” they would say. “You just need to apply yourself, try harder.” Brittanie told me this story as a part of describing what inspired her to become a psychiatrist.

Prior to this interview, please imagine my excitement, nay ... my outright fangirling ... when one of my good friends told me that, Brittanie, her adoptee bestie was about to become a psychiatrist. Living in a health care and mental health desert, I find it a challenge to find a good psychiatrist for my child clients. Despite all of the connections I have in the adoptee community, I have never met a black female adoptee psychiatrist. I am all too abundantly aware of the barriers that keep black women out of medicine. "Oh god Angela, please, please connect me to her. Tell me it's not weird that I need to know this woman."

It's vital that everyone know Brittanie. Thankfully, she agreed for me to email her interview questions. She gave her responses on her thirty-first birthday.

I chose to complete this interview today because birthdays can bring an array of emotions for those of us that are adopted, so I wanted to give those feelings, and others who have them, acknowledgment.

I had, and still have, two parents that love me very much. I grew up as an only child, even though I had four older siblings from my father's first marriage, and two 1st cousins on my mother’s side that were around the same age. I never felt like I 'belonged' anywhere, and I couldn’t understand why. I remember asking my parents once if I was adopted (before I knew). Talk about intuition! I would learn later in life that there was/is some pretty nasty generational trauma that has kept some of my family from accepting their “adopted” sister and cousin.
Nevertheless, I was a busybody! My parents put me in gymnastics, dance, singing lessons, karate - anything to tire out their rambunctious, curious little girl! I don’t have children myself as of yet, but shout out to my parents out there, especially during this COVID-19 pandemic. You all are my heroes.

From what Brittanie was told, she was adopted around 6 weeks of age. Like many in our generation, including me, she spend several weeks in foster care while legal arrangements were made. Brittanie learned that she was adopted at the age of 22 - about nine years ago.

I was a junior in college when I got a panicked call from my mom telling me there had been a “family dispute” (to put it nicely). She needed to tell me something. A family member had threatened to tell me that I was adopted, and my mother panicked. For the next year, I got 3 different versions of my “origin.” This included tales of surrogates and IVF.
A year later, I finally got the beginnings of my truth. There should never be shame in giving a child a home. But, I also understand now that my mother is a human. Societal pressure, and her inability to have a child due to fibroids, led her to feel an array of emotions, from shame to incompetence.
While I know we have made huge strides in providing emotional support for adoptees and their parents, there is still much work to be done to ensure that adoption is normalized and celebrated. Access to mental healthcare should be available to ANYONE who needs it for ANY reason.

She mentioned heroes, earlier, and the COVID-19 pandemic. She was being modest. Brittanie is working as an essential worker while studying for and taking tests to finish her MD. It's one reason why this interview is so important. We need to support her tutoring so she can bring everything she has worked for into fruition. I was so entirely moved by her backstory behind her passion to become a psychiatrist.

You’ll remember I described myself as a busy, curious, rambunctious child. In grade school, I was also a child who, despite above-average IQ scores, struggled in math and science. I would, much later in life, finally get diagnosed with ADHD-Inattentive Type.
My father, having taught high school chemistry, decided it was a "no-brainer" that he should tutor me. But unfortunately, from ages 10-14 years old, I endured mental, emotional, and physical trauma because my father stayed frustrated at my inability to “just get it” and “understand simple concepts.” As one can imagine, that period of my life led to years of insecurity, self doubt, fear of failure, depression, and anxiety throughout my adolescent and young adult life.

I found heat rising from my collar and a stinging at my eyes when I began reading Brittanie's answer as to why she chose psychiatry. Especially as she finished this section noting the disbelief she received, the urging she just "try harder," the trauma, and her compelling realization that her brain just worked differently. As she continued her answer, she acknowledged that many who hear her story feel this way.

Trust me, I’ve spent almost 20 years feeling the exact same way. But, as I grew and began to immerse myself in my search for “identity,” I found that this is a very common situation in many communities, especially those who have been oppressed. Unfortunately, it is not uncommon even, to hear people these communities make jokes about how they “had the fear of god beat into them.”
But we must never forget that behavior is learned and passed down. African Americans are still experiencing the mental and biological effects of slavery and oppression. My father happens to be an 84-year-old black man who grew up as a sharecropper in South Carolina. His grandparents were emancipated slaves. Being beaten was a way of life for many of my ancestors. It is still very much a reality for many children today whose caretakers have not unlearned this harmful way of discipline.

But how did Brittanie finally get that ADHD diagnosis?

About a month ago—yes, you read that correctly—I decided enough was enough. I made an appointment to get tested for ADHD. Between living through New York City’s COVID-19 peak, and exams being moved to being remotely administered, I had no choice but to practice what I preach. I had to be vulnerable and get tested. As I mentioned before, I was diagnosed with ADHD-Inattentive Type.
When I mentioned my diagnosis to my mother, to my shock, she just started to cry. She revealed to me that she took me to my pediatrician on two separate occasions - once at 6-years-old and again around 8-years-old. She had been concerned that I had ADHD because of things she witnessed as I developed.
My pediatrician shamed her. He told her that I was just a 'healthy, active child.' And, that while he understood she had a stressful job, she would just need to 'do better' keeping up with me. He said that she didn’t need to be 'another mom putting their kids on medication.'
He shamed my mother into silence. He let his personal and cultural biases affect his patient care. His patients paid the price. This still happens today, and it is wrong. All patients deserve safety, empathy, and options from their healthcare providers.

Brittanie shared so much more, about why psychiatry matters. She shared her insight about the expectation of resiliency that our sisters of color here discussed in a recent roundtable. She talked about some of the stresses and barriers she experienced as a medical student. I want to share that with you in an upcoming Part II of this interview. In the meantime, please support her by giving generously to her tutoring fund so that she can finish medical school.
Brittanie's PayPal pool can be found here. Her Cashapp is: $Brittaniefloyd. And, her Venmo is: @Brittanie-Floyd
Posted by Amanda Woolston

Amanda Woolston
I began blogging in 2009 to try to find my original family and ended up becoming an author and activist for the adoption community. Two degrees in social work, two kids, multiple legislative campaigns, multiple published books, two collegiate teaching positions, a clinical practice, and advanced licensing later....I'm still at it and not giving up any time soon.
Newer Post Older Post Home