#flipthescript began as a Twitter hashtag movement headed by Rosita González at Lost Daughters that began in the beginning of November 2014 for National Adoption Month. The movement’s phrase “flip the script” originated with Amanda Transue-Woolston in a video trailer for a book called Dear Wonderful You: Letters to Adopted and Fostered Youth. The context of the statement reflected on how adoption books have traditionally been written by adoptive parents. When adoptees write books for others adoptees, they get additional perspectives more like their own.

#flipthescript sought to address social media's inundation with messages about adoption in which adoption professionals and adoptive parents are overwhelmingly represented during the month of November, National Adoption Month. Whenever education is taking place about an issue or community, all voices of that community must be included. The world needs to hear adoptee voices included in the dialogue about adoption.


The goal was simple: for adult adoptee voices to be represented during National Adoption Month.
#flipthescript sought to create a welcoming space on Twitter for adoptees to express themselves; to reach out to adoptees new to public discourse; to promote acceptance of all adoptee voices as important whether they express happiness, ambivalence, grief and loss, or anger—or all of these themes at once; and to unlabel adoptee narratives as “happy” or “angry” by accepting and expecting complex conclusions from complex life experiences. Read where Rosita first introduced the movement.

Lost Daughters invited adoptees and their allies to use #flipthescript to highlight what adult adoptees are saying and to highlight statements about why the adoptee voice is important to adoption.

#flipthescript 2014 took extraordinary effort we wanted to focus into evolving. Lost Daughters Rosita González and Amanda Transue-Woolston, together with Diane Christian from the An-Ya Project, compiled and edited an incredible adult adoptee anthology that, much like #flipthescript on social media, gathered together the thoughts, experiences, emotions, art, and poetry of adult adoptees. Purchase in print or Kindle. 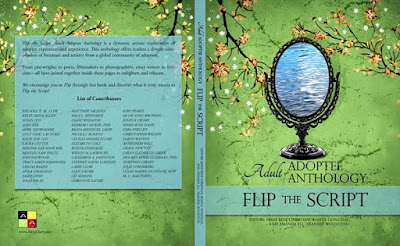 The Declassified Adoptee
Amanda Woolston, MSS, LCSW, CT is an adoption and child welfare focused scholar, author, therapist, activist, and leader. For over a decade, her work has reached millions globally through media, public policy, and writing projects.
Home
Subscribe to: Posts (Atom)