It took the #flipthescript village …

Dread and a defeated outlook prompted me to write my post at the beginning of the month. What began as a simple way for me to distract from my birthday ambiguity, became the campaign sensation of #flipthescript on #NationalAdoptionMonth. The hashtag was used close to 18,000 times this month.

The Lost Daughters have spoken before, but we were often marginalized in the adoption conversation and our message, overlooked. A person gets weary with the repeated belittling.

How powerful words are.

Nothing about us without us. #Adoptees #FliptheScript #NationalAdoptionMonth
— Catherine Johnston (@mscathyanne) October 30, 2014

#NationalAdoptionMonth has been hijacked by adoption agencies w/ goal to increase their own profits. Let's #flipthescript this year.
— Karen Pickell (@Karen_Pickell) November 1, 2014

We are so much more complicated than just love for one mother or another. #FliptheScript #NationalAdoptionMonth http://t.co/p8o8szrXHJ
— mothermade (@mothermade) November 1, 2014

#flipthescript for #nationaladoptionmonth isn't about giving adoptees a voice. We have a voice. It demands we stop being silenced.
— Amanda (@AmandaTDA) November 3, 2014 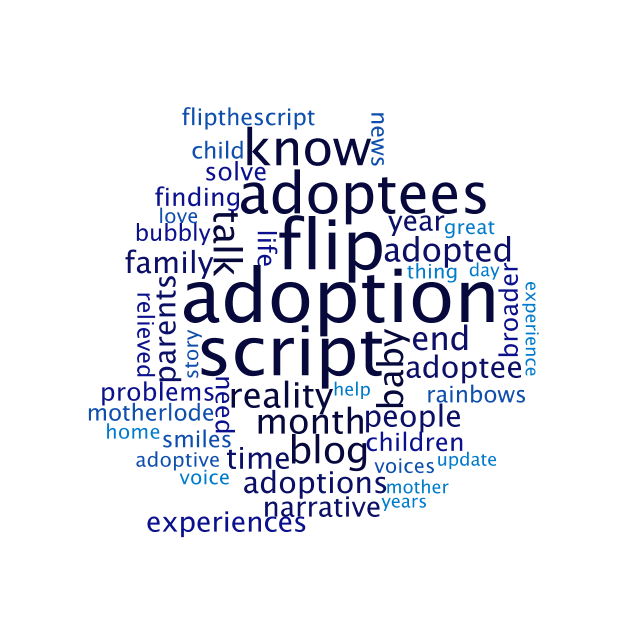 Ours began with a Google+ chat, late in the evening with Bryan Tucker recording. No one really realized what kind of magic a well-designed video presence would make.

Are you ready for this? #NationalAdoptionMonth #flipthescript #roundtable pic.twitter.com/z4ra1QHcTb
— Bryan Tucker (@BryanTKR) November 7, 2014

During National Adoption Month 2013, the word “adoptee” made only 3675 mentions but this year? 5940! Last year, the words came via blogs; this year, we moved to Twitter and the mainstream news!

Yes, I was found, but I was also lost. http://t.co/xsVhFFoGBz #flipthescript #NationalAdoptionMonth
— Combatanten (@Combatanten) November 28, 2014


Much thanks has been expressed to me, but the thanks really goes to those who bravely put their voices forward. Many were bloggers, but other adoptees soon felt safe enough to emerge. I am so happy they did. Our voices amplified and this wave of narratives washed over me and comforted me.

Welcome to the Adoptee Village. We are so happy you joined us, but we are not finished. November may be coming to an end, but adoptees will no longer be silent. Continue to amplify the #validvoices of #adoption … the voices of adoptees.

Adoption: complicated, often messy, & difficult to understand, even for those of us who are adoptees. #flipthescript #NationalAdoptionMonth
— Larry Clow (@larryclow) November 3, 2014

If I was chosen, I was also given away. Someone else's gain, was my loss. I'm not celebrating #NationalAdoptionMonth #flipthescript
— imee (@imeesayswhat) November 5, 2014

Children will not be children forever. They grow, they listen, they remember. #flipthescript #NationalAdoptionMonth #AdoptionAwarenessMonth
— Walk-Minh Nguyen (@WalkMinhNguyen) November 14, 2014

@mothermade Yes. Had a hard moment about #adoption with a non-adoptee yesterday, came back to #flipthescript for solace, strength and love.
— LaurieJonesNeighbors (@ljneighbors) November 20, 2014

my previously dormant Twitter is now filled with super smart #adoptees from all around the world #NAAM14 #flipthescript #KAD 🇰🇷🇺🇸
— kate (@haesookoh) November 21, 2014

Love holidays w/ my first Fam but I do get sad listening to my sibs reminiscence about a childhood I wasn't here to share #flipthescript
— Amira Rose Davis (@mirarose88) November 28, 2014

Additionally, check out this news coverage with Dr. Kimberly McKee that continues the movement … because, we are just getting started!

Feminist columnist, Rosita is a transracial, Korean-American adoptee. She is married to a Brit who refers to himself as an Anglo-American and is a mother to two multiracial children. Rosita was adopted in 1968 at the age of one through Holt International. Her road has been speckled with Puerto Rican and Appalachian relatives and her multiracial sister, the natural child of her adoptive parents. While quite content with her role as a “Tennerican,” her curiosity has grown recently as her children explore their own ethnic identities. She considers herself a lost daughter, not only because of the loss of her birth family, but also because of the loss of her adopted mother, who died in 2001 as she became a first time mother. Rosita has recently started her search for her natural family. With the help of G.O.A.’L., she visited Korea in August 2014. When she is not supporting her children on their individual paths, Rosita spends her time as an art educator, ceramicist and an art photographer. She also shares her adventures as an adoptee and parent on her blog, mothermade.