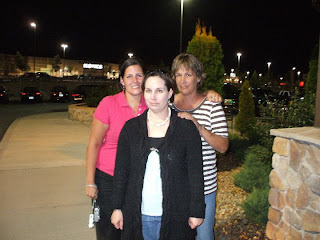 My natural mother and I continued to email the next few weeks after my natural uncle's death.  We got to know each other better and often we'd have several email threads going at once because one or both of us would think of another question we had for the other.  (Our in person conversations are much the same...we're both Geminis and tend to flit from topic to topic..lol).  We'd joke about meeting secretly for the first time, just the two of us, to "get the butterflies out of the way", but then we'd drop it and keep writing for hours about other stuff.

It was in the middle of one of those marathon email sessions, while I was at work, that she slid in the following:

"So I was thinking that maybe Cate and I would come out your way tomorrow night and take you to dinner....just a thought...too soon?...forget it, I was just being impatient...all in due time...so, how's work?"

Ummmm.  I think my heart stopped.  Did she just say TOMORROW?  She wrote back, asking if I was okay.  I replied that yes, I was fine but I was going to call my adoptive sister to see if she might be able to come with me the next night.

You'll all be wondering why I thought I should have someone else with me for the first meeting.  Honestly, I think I've watched too many Lifetime movies and assumed that was just what one did when meeting your natural mother and sister for the first time.

My adoptive sister put me at ease though.  She said that of course she'd come with me, but would totally understand if I wanted to go alone too.  It was completely my decision.

Go...alone?  I told her I was scared and terrified but in my heart, knew she was right.  I had to do this alone.  Full circle and all that.  So I wrote back to Chris and said that I'd be able to meet them at the restaurant at 6:30 the next night.  You could almost sense the relief on the other side of the email.

Work dragged by the next day.  I was anxious and tense and my manager finally took pity on me and told me to leave...and have a fantastic night.  When I got home I found my baby album.  Pictures of me from 1974 through 1976.  My adoptive mother was snap happy and I have several other albums, each in two year increments...that was the first time I appreciated her putting those together.

I left the house and drove to the restaurant.  My hands were shaking and my stomach was twisted in a knot.  What if I wasn't what they were expecting?  What if I wasn't good enough?  The internal tapes played over and over inside my head. Pulling into the parking lot, I saw them at the same instant they saw me.  And they were beaming.

I don't remember all that we talked about.  Just that we talked for hours, both inside the restaurant and later standing next to our cars.  I was surprised there weren't any tears.  Just laughter.

Chris loved the album.  The first picture was me as an infant.  Only a few weeks old.  "That's how I remembered you.  So little.  So delicate.  So beautiful".  She ran her fingers over the picture, lost in her thoughts.  I brought out two gift bags, presents for them that I'd picked out on my lunch break that day.

I'd gotten them silver necklaces, with a butterfly charm.  Instead of chasing the butterflies away, I wanted to honor them..to honor the specialness of the evening.  To acknowledge that we were all nervous but that we were finally together as family.
Posted by Cricket

Cricket
My adoptive name is Christina. My original name was Elena. I'm just a girl (okay, so I'm a 39 year old woman and mother to two but why dwell on specifics at this point?) who, at the age of 34, was reunited with her first mother. Not sure where this blog will take me but I'm eager to begin the journey.
Newer Post Older Post Home