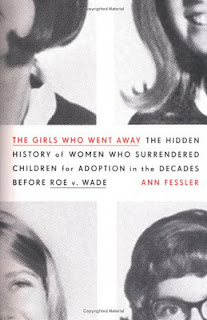 Ms. Magazine has named "The Girls Who Went Away: the Hidden History of Women who Surrendered Children for Adoption in the Decades Before Roe v. Wade" by Ann Fessler, among the Top 100 Feminist Non-Fiction books.  Fessler is an adult adoptee who collected the narratives of mothers who surrendered to adoption in the post-war pre-Roe v. Wade period and recorded their stories of social stigma, societal scorn, and experiences of coercion and pressure to surrender their babies to adoption because they were pregnant and unmarried.

I am extremely glad that this book is being considered one of the most important feminist books because often times I feel like feminism has forgotten adoption or fails to see how feminist values ought to play a role in adoption.  My fellow adoptee and friend, Joy, and I discussed this a while back as how we often see adoption come into play in feminism is when it is divided by class.  I mention Joy because she put the concept of middle class vs. lower income class in feminism and adoption so eloquently (and I probably won't do what she said justice in my summary of the conversation here).  Too often when adoption meets feminism is when the middle class woman who perhaps put off childbearing to complete her education and advance in her career is now at a place in life where she would like to have children but is unable to.  She opts for adoption which will indeed enable her to become a mother.  This is where feminism forgets that this is often at the expense of a mother of lesser economic means, who did not have opportunities to advance in life, and who cannot find sufficient support to provide for herself and nurture her child because of patriarchy and sexism in society that hinders the enactment of more progressive and adequate laws and support systems based on the idea that all women on welfare make a career out of having babies simply to gather more government "hand-outs."

I'm no fool; I understand that not everyone who has a baby and surrenders to adoption wanted to parent.  However, the fact of the matter remains that adoption has not served all women well; certainly not the ones who would had chosen differently have they been given a chance and certainly not the adopted women whose identities are amended and sealed.  Adoption did not and does not serve women, adoptive, surrendering, and adopted alike, well, when it is used as a method of redeeming women for "illicit" sex and "extra-marital" childbearing.


"My mother came and got me and let me stay at home for a few weeks.  I was three months pregnant.  She said 'you don't look it now but you will soon as I want you out of this house.'  And she said, 'if you keep your baby, you can never come back."  --a surrendering mother on Fessler's film "A Girl Like Her."  See the trailer here.
Posted by The Declassified Adoptee