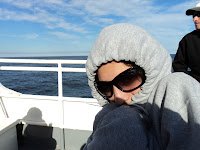 Well folks, reunion number two has failed.  No more contact, save email.  And maybe a phone call now and then.  All because I sent a "Hope you're having a good day!" text message.  And the wrong person saw it and started asking questions.  Happy Holidays!

There are so many reasons why reunions can fail.  But when it comes down to my failed reunions at this point, the big reason is honesty.  Honesty is so important in life.  It's where we get our integrity.  It's how we are open about who we are.  Its the basic part of a relationship.  You can't have a relationship, not a real one, with someone you can't trust.

My first mother and I weren't honest with each other.  Our reunion failed in part because I wasn't honest with her about my feelings.  She would say something that was hurtful and I would let it go and pretend it was all alright.  And these hurt feelings just keep building.  And so when things headed south, we had a relationship that was based on her hurting me and me not saying anything.  That's not the kind of relationship that can survive for a long time.  Our reunion also failed in part because she wasn't honest, with me or my first father.  She wasn't honest about what she wanted.  She let me think that she wanted to talk to me or potentially meet me and when I asked, the truth came out.  She doesn't think of me as her daughter and can't ever imagine meeting me.  She also wasn't truthful to my first father when I got in contact.  They are married so there was no reason for her not to say anything.  When I contacted him eight or so months later, she was furious with me for letting her dishonesty known.  Lies and secrets doomed our relationship from the beginning.

My first father and I started our reunion a little over a year ago.  I learned my lesson.  When he hurt my feelings, I told him about it.  When things weren't working out a certain way, I told him about it.  I wasn't mean, we couldn't always make changes to fix what I was hurting about, but at least he knew.  And he was able to apologize.  An apology can at times go a long way.  But unfortunately he kept me a dirty little secret in his life.  Our reunion has failed because he lied about who I was again to people who should know about me.  He was point blank asked who I was and he lied.  And because he doesn't want to be forced to lie again, he's cutting me out of his life except every once and a while.  Honesty would have gone a long way here.

I guess this post is to show people how important it is to tell the truth, even if it's hard to hear if you are forging a bond with your adoptee/first parent.  Let my tale be precautionary to you.  Secrets and lies hurt. They leave wounds that cannot be healed by a simple apology.  And that hurting will keep coming back.  I shutter to think of how others will react down the road when they do find out about me and realize they were point blank lied to.  So be honest.  It's a hard thing to do.  I know.  But so worth it in the end.