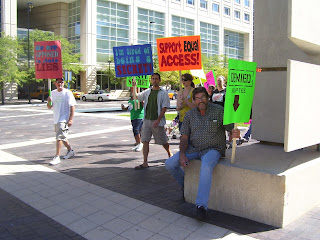 Now that I’ve returned home from Chicago, I had a thought today about how it felt like to be in the majority, instead of the minority.  Sitting at the sign-making party Sunday night was one of the first times I could look around the room and know that the majority of the people sitting at my table and the tables close by were either adopted or within the adoption triad and/or were married to someone in the triad. 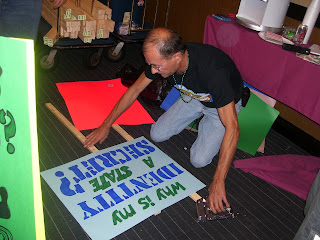 Don’t get me wrong . . .I value these questions from the non-adopted as an opportunity to educate (ok, I admit if I’m in the wrong mood, these questions can irritate me) but that is part of what I signed up for when I became an adoptee rights activist and adoption blogger.  People look to me and my fellow adoptee bloggers as a source of knowledge.

Truth be told, we are no more knowledgeable about how it feels to be adopted than any other adoptee; however, we just happen to be the ones writing about adoption. I will make two exceptions. One for our founder here at Lost Daughters (Amanda). She is definitely an expert on all things adoption.  Reading her recent post at Declassified Adoptee about how to contact the legislature and explaining adoption terminology, I felt like I just received a bachelors degree in Adoptee Rights Lobbying. 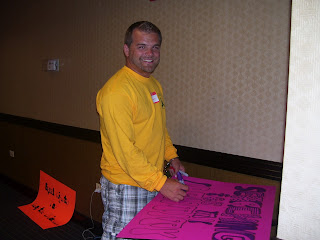 I would say the same for John Greene (pictured left), one of the driving forces in opening Rhode Island’s sealed birth certificates this year.  Speaking with him for hours on the bus, in the hotel bar and during the protest, I learned so much and hope to use that knowledge in my home state of Ohio.  You can visit John's blog here.

I also had an opportunity to meet Jean Strauss, creator of For the Life ofMe. (my favorite all-time documentary on adoption) at the protest.  If you watch nothing else on adoption, watch this!  This documentary was instrumental in helping my a-mom "get it" from a source other than her daughter.

The best part about the weekend was its informality.  It was organized, but we were given the time and space to just get to know each other, talk about our families, reunions, lack of reunions, information, lack of information and anything we wanted to talk about FACE TO FACE, instead of through Facebook. 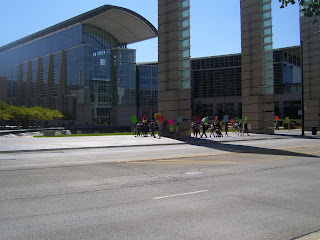 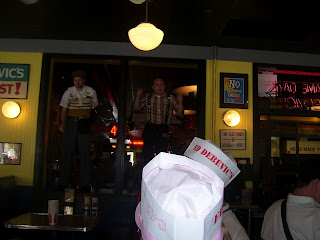 A fun time was had by all after the protest at Ed Debevic’s.  Rude waiters are part of the charm of the place and I thoroughly enjoyed watching my cohorts yell back at them. Pictured left are the waiters dancing on a ledge.

I was pleased that my husband came along with me this trip (he stayed home for the Louisville protest).  I think he was overwhelmed in some ways, but he at least had the Readers Digest version of adoptee rights from living with me.  He admitted that he would have been very confused had he not already understood adoption issues prior to coming to the protest.  He has walked with me through my reunion and has put up with my adoptee-issues so I was really happy he could be there to experience all my adoptee-kin and especially when I went back to my adoption agency for the first time to visit The Cradle of Evanston, Illinois.

It’s hard to describe exactly how I felt during the 24 hours living in adoptee-land but I will steal one of my fellow bloggers’ terms. . . it was one heck of a Bastardpalooza!
Looking forward to doing it all again next summer in Atlanta!
Posted by Lynn