Why Adoptees Don't Let Go of the Past 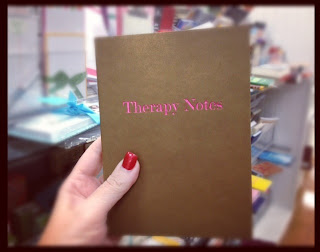 Every adoptee needs one of these.

I found this journal when I was Christmas shopping at Marshalls on Friday night. I believe it was intended by the manufacturer as a joke. Whatever the intention, I love it!  I wish I could purchase one for every adoptee. This was an early Christmas present I bought, just for me.

Healthy adoptees are perpetually processing not only our feelings but the reality of family, in order to move forward, spiritually and emotionally.

The Truth About Moving On

"Just move on. Leave the past behind. Are you going to waste a lifetime thinking about this? Don't you know God has bigger plans for you than that?"


I've heard this before. Maybe you have too.

Let's unpack that thought for a minute.

I've been a pastor for 25 years, and in all that time, I've never heard anyone advise a non-adoptee:


"Just move on. Leave your family behind. Are you going to waste a lifetime thinking about your family? Don't you know God has bigger plans for you?"

No, you don't hear that, and it would be pathetic if you did. People are often encouraged, as it should be, to love their family, to be committed to them, to invest time.

We're expected to leave our families behind, shake the dust off our feet, and go on with our lives. And then we're supposed to profusely thank God we got the opportunity to go through it all.

For adoptees, "the past" isn't just a feeling, but a present reality that involves but is not limited to:


Who IS Your Family?

What some people fail to realize is that for an adoptee, our past is actually our present.

We will always be related to our original family no matter what a an amended birth certificate leads anyone to believe.

Whether they like it or not, past is present. Because a piece of paper doesn't eliminate relatives, as much as some people would like it to. Does it legally eliminate them as a relative? Perhaps temporarily -- on paper, it does. However they are never eradicated from our life, from our very being. They are ever present, spiritually and emotionally.

And there is nothing anyone can do about it.

I think of the adoptee who recently shared with me that a little boy was asked by his adoptive parents, "How often do you think about adoption?" He said, "hardly ever at all." The adoptive parents were thrilled with his answer, convinced their son didn't really care about his original family and was perfectly happy to be adopted. Someone gently suggested they rephrase the question. Instead they asked him, "How often do you think of your birth mother?" He got somber and said, "Every day. All the time..." to the shock of his adoptive parents.

Your Original Family is Your Present...Even if You Don't Know Them!

Many people who are not adopted don't consider adoptees' birth family as family. They consider them strangers out there in the world somewhere...who basically have nothing to do with them now.

Did they ever stop to consider that perhaps the adoptive family are actually the "strangers"?  At least, it begins that way. Adoption is the only world where people think it's perfectly normal to take a child and place him in the arms of strangers and take him away, erasing evidence of the original parents through careful altering and sealing of legal documents. And they see nothing odd about this.

The truth is that adoptees will forever be on a journey of reconciling past with present, because it's impossible to completely sever the two. Asking an adult adoptee to separate from their origin, identity and family is akin to asking them to cut themselves in half and keep on walking.

Many of us adoptees know what happens when people try to do that...they can emotionally bleed to death. The sooner we come to grips with the reality that being an adult adoptee is a continual journey of wholeness, the better off things will be for everybody concerned, adoptee and non-adoptee alike. I say everyone because when adoptees aren't physically, emotionally, mentally or spiritually healthy, it affects everyone in our world.

Here's to the continual pursuit of spiritual and emotional health!

I love all of you who read here, and pray much healing and wholeness as we go forward in the new year.