Friend: Deanna, why don't you blog about adoption?

Friend: Why not? I think it will help you process things, just for yourself. And besides, you write about everything else. Why not this?

Me: It hurts. It hurts too bad. I just don't need to put myself out there. I'm not ready for that.

Friend: Okay, it's been 46 years. How much more time do you need?

Me: I dunno. Maybe another ten or twenty years.

Friend [sigh] I think you ought to pray about it.

Me: I'd rather just talk to you about it.  Going public scares me.

Me:  Adoption goes to the core of my very being.

Friend: Hmmmmmm....the core of your very being? Explain...

What Is The Core of My Being?

I've thrown the phrase around to my husband and a few close friends for years, but hadn't really examined it until recently. I avoided an adoption autopsy. Who wants an emotionally bloody mess?

I procrastinated until 2012, because it would be a dissection while my body, soul and spirit were still very much alive. Thankfully my Lost Daughters sisters provided me with therapeutic anesthesia, easing my pain through the journey of going public this past year.

All of my parts both inside and out, this is what my body's about. Sorry, the spirit of Dr. Suess came on me for a second.

My body includes my distinctive nose and feet. I never saw a relative who looked anything like me until I laid eyes on my newborn son in 1989.  Dustin was the first. I never realized how many ways his birth would affect me. I had always longed to connect with my b-family but his birth accelerated the desire, sending me on an emotional free fall that lasted until the day I knocked on my b-mom's door.

My body was different from everyone in the family that raised me. As a kid we would occasionally go to baseball games in Baltimore City (it was Memorial stadium back then). While everyone around me watched the game, I would gaze into the sea of faces that surrounded me. When someone passed by who possessed certain physical traits, I would wonder if they were among my first family.

It was illogical that my b-family would be there. They didn't live nearby.
But you wonder about a lot illogical things when you are adopted.
Because you just don't know.
And when you don't know, your mind wanders, grasping for anything to hold onto.
Whether in my hometown or vacationing far away, I studied faces a lot.
Always wondering if they might happen to be there.

Of course I never approached anyone, although sometimes I wanted to.
I stayed quiet about this. Always quiet.

As an adoptee you learn to smile and nod when clueless ladies just trying to make conversation come up and oooohh and ahhhhh saying, "she looks just like you!" to your a-mother or a-sister who look absolutely nothing like you. Your a-mom's face lights up because there's nothing in the world she's ever wanted to hear more.

Meanwhile you are thinking, "it's not true...it's really not true. They are just being nice..." but you don't say that.

Because it would kill your a-mom emotionally and that is the biggest no-no of all as an adoptee.

To say, "I want to see a face that looks like mine," is viewed as a betrayal of sorts.  Adoptees don't get a memo or anything about it, we just know it's an unwritten rule.

Throughout my life I often felt the physical disconnection.

I am fascinated by this quote from the book Without a Map, written by Meredith Hall:

"Women carry fetal cells from all the babies they have carried. Crossing the defensive boundaries of our immune system and mixing with our own cells, the fetal cells circulate in the mother's bloodstream for decades after each birth. The body does not tolerate foreign cells, which trigger illness and rejection. But a mother's body incorporates into her own the cells of her children as if they recognize each other. This fantastic melding of two selves, mother and child is called microchimerism....the mother's cells are also carried in the child. During gestation, maternal cells slip through the barriers of defense and join her child's cells as they pulse through his veins...of course the implications are stunning. Mother and child do not fully separate at birth. We do not lose each other at that moment of severance."

We were still connected.
No wonder I felt disconnected.

I'm not sure there's any more challenging place to be than connected and disconnected at the same time.

People often use the word soul as a religious term. Seeing the confusion on people's faces at times when the difference between soul and spirit is discussed, I believe it is sometimes helpful to tell people to think of the soul as their mind.

My soul is the most complicated part of me. It encompasses my mind, will, emotions, conscience and imagination.

Expressions of the soul uniquely manifested themselves from the very beginning, mainly through my art in it's various forms. Singing, playing the piano, writing my thoughts -- these were all talents that came bursting forth, announcing themselves before I even had any formal training. 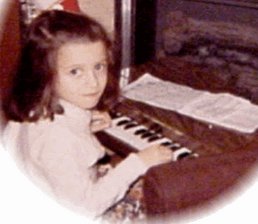 My a-parents had records they would play on the stereo -- 33's of southern gospel greats such as the Happy Goodmans. They would play those records and my hands would go up and down the piano, finding their way to exactly where they needed to be, to the delight of those those watching and listening.

Shaking their heads in amazement people would ask: "How do you find those beautiful chords? Where did you learn to play those runs up and down the piano?"

"I don't know," I would respond. "And I can't really explain it. I just know where to go. For some reason, my hands just find their way and I don't even have to think about it."

I would take voice and piano lessons. My talent would quickly be recognized as I was elected president of my high school choir when I was only a freshman. I would go on to play and sing professionally, and direct choirs in the years to come.

But the expression of all of these talents began almost after I first began to talk.

The convenient answer everyone around me gave was, "talent comes from God."
I believe all of us are gifted by God. Whether adopted or not that is so.
I also believe nature and nurture play a part.

In reunion the pieces of the puzzle were filled in. I discovered that my b-aunt played the piano just as I did from a tender young age. She played by ear with no training and quite proficiently. My b-mother directed the children's choir in her church for years.  My brother is a gifted guitarist. My b-sis is talented vocally. (Once reunited, she and I sang a duet in 1997 at our mother's wedding. There is nothing quite like the way siblings harmonize even if they did not grow up together.)

My a-parents played a part in recognizing the gift within me, nurturing it by providing music lessons and placing me in programs at school and church where my gifts could flourish.

Nature, nurture and the gift of God all play a part in the expressions that come from the soul.

My spirit is the immaterial part of me, yet it is the most important part. It is not accessed by my five senses and will live forever.  It is just as real as the body and soul. Not that the other two should be minimized or neglected, but the spirit lives forever. My spirit is what connects with God.

There are times my spirit knows something although I haven't realized it yet by seeing it with my eyes, or hearing it with my ears, touching it, tasting it or smelling it.

This is not a rarity, not something that is unique to me.
Everyone has a spirit.
And you know things in your spirit.

Through our spirit we know things we never imagine or conjure up. In due time, something reveals itself that our spirit knew before the rest of us did.

I know I am beginning to sound more like the Long Island Medium from TLC than a pastor...

Hang on with me here. This is nothing spooky.
The point is, we are more than a physical shell.
Our soul and spirit are aware even if the rest of us is not.

Many of my adoptee friends who discovered their adoptions later in life said that they just knew although no one ever told them they were adopted. Their spirit knew before their body or soul became aware.

My spirit has cried out to God throughout the years, and I have leaned on Him every step of the way through my journey as an adoptee.

Some adoptees blame God for their relinquishment and their adoption. I understand why God seems a logical target. My heart goes out to all adoptees and I don't judge. At the same time, I am compelled to share why I chose differently.

Adoption does go to the core of my being.
It affects me ~ body, soul and spirit.

Since adoption touches everything and the spirit lives forever, this could have been the eternal post. But I'm choosing to close it here.

Thanks for joining me on this body-soul-spirit autopsy. I've learned it's not as bad when you have a sisterhood around to help with the clean up.