Yesterday, at Lost Daughters, I shared my review of Corie Skolnick's novel, ORFAN. The existential fable is at turns moving, depressing, and uplifting. And, of course I had a ton of questions for her!

Healing and Hope for Adoptees ... is it possible?

Laura Dennis -- When you introduced your book to The Lost Daughters, you spoke a bit about full circles, especially when it came to readers who were deeply affected by ORFAN.


I’m thinking about long-standing hurts that--somehow, some way--through the kindness of strangers, a small act of forgiveness, or a twist of fate ... can be rectified. This may be especially true in the case of adoption reunions. In writing ORFAN, how did you balance the need to show that some grief still exists, while there can be healing and hope?

Corie Skolnick -- This is a great question. I don’t know if it’s a legitimate goal of fiction to provide a literary roadmap for the resolution of “long standing hurts”, but if it is, I would love to report that I consciously aspired to that in ORFAN.


I do know as a therapist I was always impressed by the claim made in therapy by many adoptees seeking treatment that the extreme grief about the loss of their origins snuck up on them. They often said that they experienced blissful, perfect childhoods in their adopted families and they were utterly shocked when delayed “issues” surrounding adoption started to surface, often in adolescence and sometimes in young adulthood. Many were appalled at the depth of anger and grief they sometimes uncovered about their relinquishment. Many felt extremely guilty about it. So, I did, very consciously, try to create a character in Jimmy Deane who was indisputably entitled to his “enduring grief.” I may have actually overwritten that part more than just a bit, but bear in mind that I wrote ORFAN as a fable. And, I wanted to legitimize the adoptee’s feelings about their own experience by creating empathy for the character.


And, the book is an existential fable, so Jimmy’s quest for healing and hope are a natural part of the story. His crisis when faced with unendurable loss is meant to be instructive. That part is definitely overwritten. Melodramatic even. So much so that an agent I approached wrote to tell me that she had not encountered a book “so overwritten” since she turned down Forrest Gump. I took that as a compliment. The balance comes at the very end of Jimmy’s quest. If ORFAN is an allegory then the lesson is in that balance. No life is without loss and grief. Your existential duty requires that you seek healing and persist in hope.

Empathy for our first mothers

Laura -- The opening scene -- of birth, fear, love, loss and adoption -- was for me particularly hard to read. As adoptees, many of us feel deep empathy and sorrow for our first mothers, imaging how it would have been to give us away. What types of reactions have those in the adoption constellation had?


Corie -- Not to be surprised, birth mothers have the strongest reaction to the prologue. More than a few have told me that the fiction I conjured is very close to their lived experience. I had some help (a lot) with that chapter from several women I know well who surrendered children under very similar circumstances in the late sixties. I owe a huge debt to them for any resemblance to accuracy.


In terms of a specific response to that scene, I am actually a little bit surprised that I haven’t heard much empathy from adoptees for their birth mothers. I had hopes for that to happen. But, your own response is probably the only one from an adoptee that I would call truly empathic.


Now that you’re asking, I do not recall a single response from an adoptive parent that specifically demonstrated empathy for either the relinquishing mother or the relinquished child. I don’t really want to speculate about that here except to say that I guess that kind of relative silence reflects the general conversation about this issue, doesn’t it?

Laura -- For me, ORFAN is about the characters’ lives coming full circle. The coincidences and missed opportunities, if you will, serve a larger purpose. We just don’t know what’s around the bend, but through the main character, Jimmy Deane, we are able to see that resilience and openness in even measures allow him to appreciate the good when it does come along.


Can you talk a little bit more about your views on adoptee resilience, or other traits you see in adoptees?


Corie -- I have a profound admiration for “resilient” adoptees. To survive and thrive (and so many do) when burdened by mysterious and unfathomable feelings of loss and alienation and disorientation! Wow! Just wow! I don’t think it’s an overstatement to call that kind of survival miraculous. This is why Jimmy Deane is such a magical character. A lot of the psychological qualities exhibited by adoptees are noted as negative or dysfunctional. I think it’s much better to note anything problematic as “strategic.”


Like your own flight into non-reality [as told in your memoir, Adopted Reality]. Was that craziness? Psychosis? Or, was it a very creative response to overwhelming emotional, physical and even spiritual overload?


Adoptees in my experience are the ultimate adapters. And, I don’t know if I would say universally, but definitely, I would say that in numbers that are statistically notable, adoptees are gifted and artistic and intelligent. I’m still waiting to meet an adoptee that has not excelled in some art form. This is why I made Jimmy Deane a musical prodigy and such a creative survivor, in every sense. He’s the quintessential resilient adoptee.

ORFAN ... Orphan ... Not all adoptees are without parents

Laura -- The title of the book, ORFAN, works on many levels. It’s the misspelling of a young boy who is told he’s without a family. He’s only five, but he’s taught himself how to read, and he therefore sounds out the word, “orphan,” a term he’s heard repeatedly applied to himself. But it’s also a misnomer -- as is true for so many adoptees. We’re not orphans; we’re just relinquished from our original families. Without giving the ending away, can you share your thoughts on this? 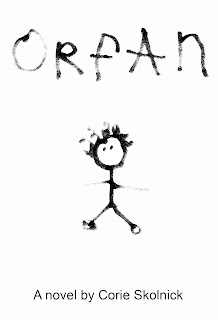 Corie -- Oh, I’m so glad you “got” that! It’s just shocking to me how many people don’t. I admit that the title is provocative, and I guess it isn’t all that much fun to be provoked, but, come on, people! Put your smart hats on, please! Obviously you understood that the lesson in the title is, at least on its face, about the destructive power of words and how damaging a pejorative attribution is to a child’s developing identity. The title is meant to make the reader uncomfortable with the very word that – you’re right – erroneously describes a child and makes her culpable for what has been done to her, not at all who she IS.
*  *  *  *  *


It’s been so great getting to know Corie. I highly recommend her book, ORFAN, which is available on Amazon in paperbook and ebook.


About Corie Skolnick -- Born in Oak Park, Illinois, and raised on Chicago’s south side, Corie Skolnick has lived her entire adult life in Southern California. She is a California licensed marriage and family therapist and a “sometimes” psychology instructor at California State University, Northridge and Moorpark College. Among the many courses she has taught at both colleges, her very favorite is The Psychological Aspects of Parenthood. She has two grown children, both of them in the arts, and she is married to the social psychologist, Paul Skolnick. ORFAN is her first novel. (Look for AMERICA’S MOST ELIGIBLE to be published by Mannequin Vanity Publishing next year!)
Posted by LauraD