Welcome to Parenting Issues--Article 1: The Beginning

“Parenting Issues” begin with pregnancy, heck, before pregnancy, when one thinks about getting pregnant (or forgets to plan for its possibility). Hence,  I will start at the very the beginning; it’s a very good place to start. 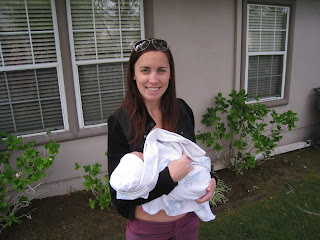 The Lost Daughters blog was “retooled” recently with all these cool new columns (see the columns at right). I signed up for writing about motherhood as an adoptee, which became “Parenting Issues.” Yippee! I can do it! I’m a mom, I’m an adoptee! Oh, the blog posts I’ll write, oh the places I’ll go!
Yeah, um, not so much.
That darn contributor picture just stared back at me every time I hopped onto Lost Daughters to read a new and insightful post from one of my LD sisters. And I got nothing. Nada. What was I thinking, anyway? My kids are so little; I’ve been a mom for just five years, who am I to give advice?

Insult to injury: I didn’t seem to be doing a very good job at parenting at that particular moment.

My children and I were going through a phase, one in which I was constantly The Bad Guy, while other adults got to be the “fun ones.”
Specifically, I was the one trying to teach them normal things, such as: We sit at the table; we try the food that was lovingly prepared for us. We don’t say “bleach”the moment we look into our plates.

We feed ourselves. (It's a common thing here in Serbia, people will just feed children. I'm talking seven-year-olds being spoon fed their entire dinners. I digress.)

While sitting squarely on our tushies, we make conversation in a normal voice, no screaming or whining. We discuss neither poop nor pee. In fact, no toilet-talk whatsoever at the table.
I consider none of these requests to be outlandish or non-age-appropriate. My children are three and five, and these are reasonable standards necessary to create a relaxing eating environment. ... Yet, I was The Bad Guy, by extension ... the bad momma. The mean momma who wouldn’t allow grandma feed my little boy while he sits on the couch like a king, spraying crumbs and regaling the merits of peeing standing up.

Guilt, Motherhood and the Adoption Lens

I knew I was right, and yet I felt guilty.

I felt guilty about being the mean momma, and I felt stupid for signing up for Parenting Issues, when I can’t even straighten out one “parenting issue” in my own home. Add in parenting as an adult adoptee? Jeez, it was too much. So the column languished.
Earlier this week I wrote a post at my personal blog about the relationship between Catholic guilt and motherhood guilt. I purposefully left out the whole adoption thing. To avoid adoption-issue-overload. I was curious to explore something not connected to adoption.
You see for several months as I’ve immersed myself in adoption-related education,  and I’ve filtered everything (or almost everything) through the so-called adoption lens. Right or wrong, for better or for worse. Adoption affected me so deeply, and for such a long time, that I tried placing this filter over each aspect of my life, examining it to see whether having been adopted was a factor.

When an adoptee gets pregnant does it ruin her life, too? 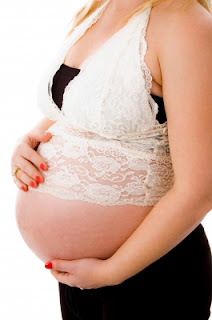 Here’s a great example of the adoption lens question. I wanted no pictures of me pregnant. (This lady pictured above? not. me.)
I wasn’t one of those Southern California pregnant ladies, walking around with my hot pink velour drawstring below, tiny-tee above, and bare-belly proudly displayed. I was wrapped in layers--because I was cold, I’d explain. And all black ... because it’s slimming.
I tried hard not to gain too much weight, and even in my third trimester, strangers who walked up behind me at Starbucks were thrown for a loop when I’d turn and maneuver my belly around them. “Oh, you don’t look pregnant from behind!”
Previously, I’d chalked up all of this pregnant-lady fashion nonsense to ... body image issues and perfectionism, inspired primarily by my previous career as a professional modern dancer. Standing in front of a mirror all day in a leotard and tights, year-after-year, having your body and movements examined endlessly ... took a toll.
Just for ships and giggles, let’s look at it through the “adoption lens” for a moment.
My tall, slim first mother was sixteen when she got pregnant. When she started showing, she went to live with her father in a nearby town. Her mother insisted that no one in their hometown know. I have seen one picture of my first mother while pregnant with me--in her first trimester, definitely not showing anything! After that, no photos.
As a teenager, I was nowhere close to losing my virginity. (Hello? Strict Catholic upbringing!) And yet I was terrified of getting pregnant. Let me be more specific. The internalized take-home message of my childhood adoption narrative was that my first mother got pregnant and (nearly) ruined her future. Save for “giving me up for adoption,” that is. With adoption, I understood that my first mother absolved herself, allowing her to go on to “make something” of herself.
Therefore, I was terrified of getting pregnant and ruining my life.
Deep in my subconscious, I just knew that if I got pregnant as a teenager, I would ruin my life. Why? Unspoken, not-fully formed, but there nonetheless was this reality: I knew I could never give my baby away. I was such a cute, chubby baby! How could anyone give little me away?! Especially after holding me!
I was one of those adoptees for whom adoption kool aid came and went. I could see through the adoption fog, would head for the light at the end of the tunnel, and then somehow ... I’d get lost and languish in Adoptionland. How’s that for adoption-speak? All the jargon stuffed into one loaded paragraph.

Married with a house and job: perfect motherhood material, right?

And so. When I became pregnant, I was married. I had a house. I had a car and a steady job. I was no longer a dancer, obviously. Modern dance and steady life don’t go hand-in-hand.
Yet I wanted no photos taken of me. I “hid” my pregnancy in plain sight. Of course, friends, family and colleagues all knew I was pregnant; everyone was very happy for me. It was almost surprising-- freeing really, to realize: Pregnancy is a positive event. Getting to have a baby is a cause for celebration. People are happy and excited, anticipating a joyous arrival.
I’m not an ogre; I was excited to meet my baby girl. (Of course I was scared stiff about giving birth, but that’s a whole other story for a whole other day.) Was hiding my pregnancy and having no pictures taken a body image-thing? Not wanting to be perceived as “fat”? 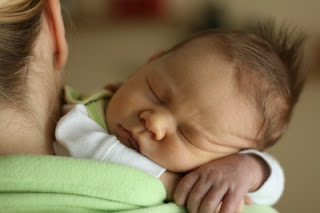 Or ... through an adoption lens

Was I mirroring what I believed to be the experience of my first mother?
Mirroring, and then, ultimately, rewriting that history?
Perhaps discovering a revised future in which there is no relinquishment, no adoption, no kool aid and of course, no fog?
Was I creating a story with a better ending, one in which the baby gets to cuddle her momma, to nurse her, to be loved not from afar, but up close and forever?
Maybe ... This particular “parenting issue” was a new, different beginning. A new mom--an adoptee herself--constructing an ending in which the baby stays with her momma.

Thank you for joining me in my very first "Parenting Issues" column. I'll be exploring other mommy exploits, emotions and experiences ... all from an adult female adoptee perspective. I hope you'll comment below and share your parenting perspectives, on pregnancy, guilt and motherhood.
Posted by LauraD