Long Way Out of the Fog: A Review of Split at the Root by Catana Tully 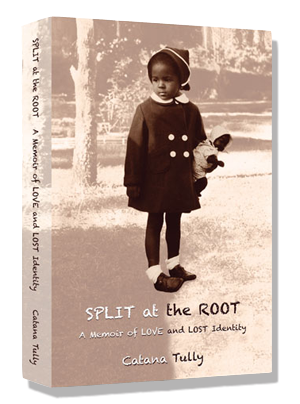 I’ve read numerous opinions lately regarding the concept of adoptees being in "the fog,” referring to those who claim to be unfazed by their adoptions or even happy about being adopted. It’s difficult at times for those of us who’ve struggled from an early age with being adopted to understand such a radically different viewpoint, but Catana Tully’s recently published book, Split at the Root: A Memoir of Love and Lost Identity, describes in exquisite detail how questions of identity can hide deep within and how long it can take to uncover their origin.

Tully was born in 1940, the first daughter of a young, unmarried, native Guatemalan woman named Rosa who worked for a wealthy German family. When she was very young, her mother left her to be raised by Esther and Pablo Doescher. The white, German couple named their new child Catana, but usually called her by the nickname Mohrle, which means “Moor” or “darkie” in German, a reference to the color of her skin.

Mysteriously, Rosa returned time and time again to visit her daughter, but young Catana wanted nothing to do with her black mother, or any black person, for that matter. Mutti (her German mother) raised her to be a refined, European young lady, and Catana grew to think of herself first and foremost as being German. As a young woman, she moved to Germany, and became successful as a model and actress throughout Europe, in part due to the fascination people there had with her exotic look.

During this time, Tully’s utter rejection of her identity as a black person is stunning. She truly loved her German family and bought into their customs and lifestyle completely, so much so that she even internalized their conception of dark-skinned people. After marrying a white American, having a child with him, and moving to the United States, she confesses being unable to relate in any way to black people there and even feeling afraid of them. I found it fascinating to hear her honest impressions of both her own race and race relations in the U.S., because hers is the viewpoint of an outsider in both cases. Although the face looking back at her from the mirror was black, Tully saw herself as white—a phenomenon she later calls the “colonized mind.”

In middle age, though she had completed a doctorate degree and become a college professor, Tully still felt insecure about her identity as a black woman. Yet even so, she did not recognize a link between her lack of self-esteem and her being raised outside of her natural family until many years later, after a great deal of therapy and numerous trips back to Guatemala in search of answers about the true story of the beginning of her life. Only after examining her origins with the eyes of an outsider was she able to finally reconcile with her biology and native culture, and relate to herself as a black woman.

Although I am a white woman who was raised in a white adoptive family, I found the story of Tully’s lifelong search for her true identity fascinating. I, too, have spent long years trying to reconcile the many forces that have played a role in shaping the person I am today. I, too, have been looking for a way to feel at home in my own skin. I’m sure that many adoptees can relate to the concept of trying so hard to fit in that we lose ourselves in the process, which it seems is what happened to Tully in the extreme when she became immersed in her German family. In these terms, the complexity of “the fog” becomes easier to understand. I recommend Split at the Root to anyone who has ever experienced the uneasy feeling that she doesn’t quite belong.
Posted by Karen Pickell