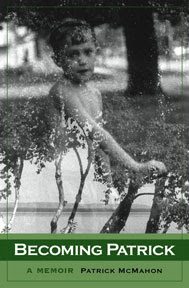 Patrick McMahon and I have a few things in common. We’ve both felt that tug toward a life not being lived, that rumble of discontent for which we struggled to locate a source. We’re both adopted. We both searched for and reunited with our birth families, in the process finding something within ourselves we hadn’t always realized was there.

In Becoming Patrick, McMahon describes the process he went through to first identify and then contact his birth mother. He gives us that scene we all long for—the one in which child and mother reconnect for the first time in umpteen years.

But what I love most about this book is that it doesn’t end there. McMahon goes on to document the entire first year of his reunion in extraordinary detail. He tells us what he was thinking and feeling as he gets to know not only his first mother, but siblings and extended family, and explores the mystery of his first father. He explains how knowing these biological relatives affects his relationships with his adoptive family members.

Perhaps most importantly, McMahon describes how learning about his biological roots leads to his own self-discovery and a boost in his self-confidence, including his transformation from an engineer to an artist and photographer. This is not a road easily traveled. There are numerous stops and starts, even reverses at times, all of which made perfect sense to me as someone who’s been on a similar journey.

I only wish I’d read Becoming Patrick before I met McMahon at the American Adoption Congress conference this past April; I read a few of my poems at the open mic session he led. I wish that I’d attended his Inside Out: Expressive Arts Adoption Healing Seminar during the conference. I’m keeping my fingers crossed that he’ll bring the program to Atlanta one day soon. I’m also hoping that McMahon will pen a sequel to Becoming Patrick to fill us in on how his life and identity have been transformed during the twenty years since he first began his quest.
Posted by Karen Pickell