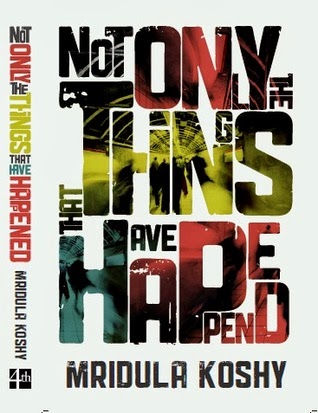 Mridula Koshy contacted me several months ago, asking if I would review her first novel, Not Only the Things That Have Happened. It is the story of a Indian woman and her son, who is ultimately adopted by a white couple in the U.S., told from the perspective of an omniscient narrator who lets us in on the thoughts of the birth mother, adoptive mother, the son (as a child and as a man), as well as other characters surrounding the central plot.

This is a complicated story, with many twists and turns; adding to the confusion for me was my unfamiliarity with cultural aspects of Kerala, India, where the tale begins. The first half of the book deals with the life of Annakutty, the boy’s mother, though it is not obvious when the book begins that its focus will be on the intertwined lives of her and her son. Koshy’s prose in many ways reads like a mystery unfolding in poetry, which at times is absolutely striking, yet also is somewhat unsatisfying when one wants to get a firm grip on things like timeline and familial relationships.

I never felt I had a clear understanding of how the boy was conceived, except that he was conceived out of wedlock, which is a circumstance many adoptees can relate to. I did understand that Annakutty herself was an outcast, seemingly due to her very dark skin along with the fact that her own mother had died and her father was an unsavory character. What stood out to me in the first half of the book was its description of extreme poverty—dirt floors, peeing on the ground outside—and a pervasive attitude toward the main female characters of the story that they were “less than” in many ways. I felt myself resisting this fictional portrayal of a birth mother because it seemed too easy to judge her unfit. I wished to better understand her lifestyle and motives, but that deeper understanding was difficult due to the unusual structure of the story.

What is clear throughout the first half of the book is that Annakutty loved her son and misses him throughout her life. What remains somewhat unknown is why she gives him to a visiting German woman, a fact we don’t learn until the second half of the book. Perhaps this thought of Annakutty’s near the beginning of the story is the key: “Boys will tell him soon enough what he is and what his mother is, boys who will take the trouble to explain to him what the word ‘bastard’ means.” How many of us adoptees have also wrestled with this word “bastard?” How many of our mothers also felt unworthy?

In the second half of the book, we meet Annakutty’s grown son, now named Asa, living in the mid-western United States. He is middle-aged and divorced with a young daughter. We meet Asa in the full throws of an identity crisis. He dreams in fragments of memory that he can’t ever put together. The people and objects that come back to him don’t make sense. Koshy slowly reveals details of his life since the day he left Annakutty, but she does so in a roundabout way that left me wanting to know the full story. Perhaps this is on purpose, so that the reader feels the same confusion as Asa in trying to figure out how and why he came to be adopted and who he really is.

The journey Koshy has imagined for Asa after being separated from his mother seemed too artificially complex to me, although certainly there are real-life adoptees who have experienced similarly complex lives. However, the identity struggle Asa goes through struck me as authentic—a perceptive understanding by this author, who is herself an adoptive mother. (In order not to spoil the story for other potential readers, I won’t explain the details here.) I also thought Koshy ended the book appropriately, with many unanswered questions, just as there are in real life for a vast number of adoptees. I would have liked more exploration of the adoptive parents, though. Their motivations for adopting after having three biological children of their own are only briefly touched on, and the adoptive mother in particular came off as too tragic a character to me.

Mridula Koshy explained to me via email that this novel has little to do with her own experience with adoption, although adopting did lead her to investigate wrongdoing in intercountry adoptions, particularly in her native country. Her research for the book included David Smolin’s paper “The Two Faces of Intercountry Adoption: The Significance of the Indian Adoption Scandals” as well as other sources on Indian adoption and intercountry adoption in general. She also read blogs of adoptees, birth mothers, and adoptive families while writing the book.

I came to the novel having little understanding of Indian culture or issues with adoption in India; however in reading it, I’m reminded that prospective adoptive parents in the United States need better understanding of the cultures of those countries they seek to adopt from and especially need to be diligent in ensuring that children being advertised for adoption are truly in need of homes and that they have not been unethically "orphaned" by unscrupulous agencies in need of product to sell. I’m also reminded of the powerlessness of single mothers in many societies, including ours here in the United States. The tragic tale spun in Not Only the Things That Have Happened may be fiction, but similar tales unfortunately play out far too often in real life.


Note: The author provided a copy of this book in exchange for a review.
Posted by Karen Pickell