So What If I'm Asian 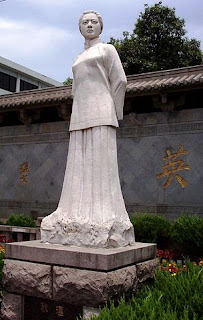 It is the 21st century now and has been for over a decade.  As a woman I would like to imagine--if not believe--that feminism has gotten further than the 60s bra burning and the 70s sexual revolution. That it is alright for young women like myself to want to have a carrier, a husband, and a family.

Since I recently began my first job, something rather strange has happened.  My boss has told me not to laugh or joke too much at work. And I think you all know what happens when you know there are certain things you can't do - like laugh. If you happen to start laughing then you will laugh even louder, longer and harder.

I am young and a woman - someone has even said that I am beautiful.  At least once I have been told that I am too wild and beautiful - I am not sure if that was a joke. At work I wear a uniform and, since I have been unemployed for many years, I decided to start dressing smart once I got a job. The thing is, I like clothes and fashion, I admit I like to dress smart even on a weekday. I like to think I can get away with wearing whatever I like. I often wear a dress and high heels or skinny pants and boots which might be provocative or too sexy for some but honestly speaking--I don't care. It is my body and I should be able to decide what I'd like to wear to and from work - I wear a uniform at work so what's the deal ?

Despite wearing high heels, tight fitting clothes, and really short dresses, I am proud to call myself a feminist. I believe women can do whatever a man can . These days a woman can survive very well on her own I know several women who have done just that. I am an idealist.  I would like a future spouse who willingly would agree to joint maternity leave and who doesn't believe a woman alone should care for the household and the children. A relationship should not be a monologue - it should be a dialog with giving , taking, and compromising.

I so wish someone could have prepared my mum for what most likely could happen to me as an adult.  Then my mum could at least have tried to warn and prepare me. Instead, now I have to stumble in the dark. My mum seems to be oblivious to what has been known as Yellow Fever. There are so many things that I now realize that mum could never teach me or prepare me for - because she does not know of those things herself.

Despite the "Yellow Fever" mum naturally doesn't know anything about pregnancy and childbirth.  If she does, it is not something she has experienced herself.

Of course, I am aware of my ethnic belonging. I know that I am kind or at least try to be nice and kind to most people. But you can't love every human on earth. Just because I am Asian it doesn't mean I am nice and submissive. Since my adoptive parents (who I refer to as mum and dad) are Swedes and live in Sweden, I was raised in one of the world's supposedly most liberal countries in the world. In Sweden feminism has managed to make life better for many women. I like to think I am one of those women too - one who can have a successful career, husband, and a family with children. As soon as I look in the mirror I am reminded of who I am. I refuse to accept or believe that my ethnic heritage will deprive me of any possibility to live a an equal life where I would have the same rights and responsibilities as a man would.

It seems to me that feminism is a movement that still hasn't been able to change much, and based on personal experience it seems like it is more acceptable for a White person to claim to be a feminist than it would be for me to. So I have begun to see that, unfortunately, feminism is linked to race...

The world is also changing and developing like it should. South Korea's latest president is a woman who seems to have devoted herself to women's issues--among other things.

Sometimes being raised and growing up as a female adoptee can be rather lonely indeed...
Posted by Elle