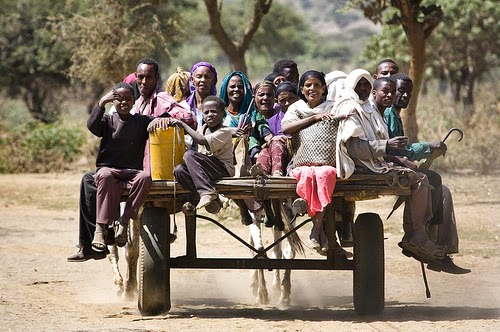 According to UNICEF, there are 153 million orphans worldwide[i]. UNICEF defines orphans as children who have lost one or two parents to death or desertion. It also reports that the vast majority of “single” or “double” orphans are over 5 years old and usually live with a surviving parent or family member[ii].

It’s difficult to quantify how many adopted Ethiopian children are double or single orphans since our documents usually lack information about our first families. Most adult adoptees have told me that their documents either don’t mention their parents’ names or state that their parents are deceased. However, some adoptees have memories of their first families. Upon reaching adulthood, many adoptees have travelled back to Ethiopia and found their first mothers or first fathers alive. Others have reunited with their siblings, aunts and uncles. Limited financial resources, unemployment, death, illness, cultural perceptions about unwed or single mothers are some of the reasons why so many of us became “orphans”.

Yet the supply of orphans is correlated with the increased demand for Ethiopian children starting in the 1990s[iii]. There have been numerous, well-documented reports of babies and children being trafficked by Ethiopian and American adoption agencies, sometimes in concert with Ethiopian orphanages. Children have been stolen from their families and families have been coerced or tricked into giving their children up for adoption, sometimes in exchange for money. First families are usually sold the belief that their children will have a better life abroad and will return to help them. Furthermore, adoption agencies don't usually explain to first families that adoption is traditionally a one-sided affair meaning that they will lose contact with their children. While first families are promised updates of their children, they rarely receive them. Some have had to "pay off" agency or orphanage staff to obtain information about their children’s whereabouts. To make matters worse, the names of first parents are often omitted (or partially omitted) from adopted children’s official documents, meaning that birth family searches are very difficult and costly for adoptees and adoptive parents.

Interestingly, most adult adoptees who I’ve spoken with were adopted before the huge boom in Ethiopian adoptions. Nonetheless based on their stories, most of us appear to be “manufactured orphans"[iv] a term coined by investigative journalist E.J. Graff to describe the myth that there are millions of orphans in need of families. I've chosen to use this term because most of us had a mother or father, aunt or uncle who, for one reason or another, could no longer care for us. If more information about our first families had been included in our official documents, maybe some of us would not have been adopted. Or perhaps our adoptive parents would have given more thought to our first families and the realities in which they lived. I’ll use my story as an example: a few years ago, I learned that my first father was alive and present at my birth. For some reason, this information slipped through the cracks. There’s no mention of him in my adoption papers which are my only official documents from Ethiopia. Up until the age of 23, I believed that I was a true orphan--and so did my adoptive parents. I know that they would have asked more questions before adopting me if they had been given this information.

While adoption probably saved my life (given that I was born in a war zone, also hit by famine), my orphan story is extremely holey. I question the lack of information in my documents that gave people, like my adoptive parents, the belief that I had no family ties at all. It also sends me message that knowing my family background is of no value or importance. Similarly, I find the constant use of “orphan” during National Adoption Month offensive and misleading. It discredits the experiences of first parents, as it completely erases them from the discussion. By doing this, it gives the impression that adoptees don’t have first families or pre-adoption stories. Yet we do. I don’t know (and may never know) my pre-adoption story, but I have one and so do all other Ethiopian adoptees.

Some adoptees remember their pre-adoption years very clearly. Some remember living happily with their first parents or family members before ending up in orphanages. Others adoptees remember living on the streets, hustling to make ends meet, creating a sense of "family" with other street children. Some have vivid memories of the places they lived, of their childhood friends, of the smell of food. Some remember how difficult economic circumstances created unsafe conditions for them and their families. Some also remember the abuse they experienced at the hands of strangers or family members, frustrated and lacking the resources to provide for them. Indeed, not all of adoptees’ memories are positive, but they attest to the fact that poverty puts strain on families; it can disrupt relationships and increase the risk of violence against women and children.

The experiences of Ethiopian adoptees’ illustrate that being an “orphan” is much more complex and nuanced than what National Adoption Month portrays. Unfortunately, most Ethiopian adoptees have not shared their stories. Some of us don’t have access to our stories due to falsified documents or because we’ve buried our pre-adoption memories. For those who remember, telling their stories can be too taxing. Adoptees often fear what their adoptive families will think and feel, and they also feel powerless to change the current adoption system. Since adoptees' voices are marginalized in adoption discourse, they question whether sharing their stories and views on adoption will actually make a difference. I think it will.

Campaigns like #Flip the Script are crucial because they challenge the dominant adoption discourse, creating much-needed spaces for adoptees to come out of their isolation and talk about issues that the adoption industry tends to omit or misrepresent.  Personally, I’d like to see a revolutionized version of National Adoption Month that includes the voices of adoptees. I’d like to see terms such as “orphan” broken down and contextualized as well as a greater push for truth and transparency in adoption policies and practices, coupled with tougher laws to protect the rights of first families. I also think there needs to be more discussion of the needs of first families in developing countries and various measures aimed at helping them preserve their families. But if National Adoption Month does not adequately discuss core issues in adoption, it just means that adoptees will continue creating alternative discourses and adoptee-centric spaces. As more and more adoptees of various cultures and backgrounds share their stories, I’m convinced that a more complex and nuanced understanding of adoption will be brought forward, which includes greater awareness and discussion of socioeconomic issues and the power dynamics at play in widespread domestic and international adoption.

Besides pushing for a more balanced discussion of adoption in Western countries, part of the solution to problems such as the so-called “orphan crisis” lies in the hands of sending countries. While Ethiopia is one of Africa’s fastest-developing nations, there needs to be a continued effort to providing Ethiopians with equal access to education, employment and reasonable wages allowing them to sustain their families. This way far fewer parents will be forced to relinquish their children. By sharing their perspectives and experiences, I believe that Ethiopian adoptees will help reframe the adoption discourse, while also shedding light on the systemic issues that turned us into orphans in the first place. In the future, my hope is that we will move from being an invisible diaspora community to a force to be reckoned with.