Congratulations Ohio Adoptees! You can now have a copy of your original birth certificate!

As a proud Ohioan, it brought me great joy to be able to stand beside my fellow Ohio adoptees this past weekend in celebration of the unsealing of adoptees' adoption files and original birth certificates for those adopted between 1964-1996.  This is a momentous event and one I was happy to be part of.  Early on in the process, two other adoptees and myself sat down with Representative Jim Butler at my local Starbucks who advised he fully supported this legislation and gave us advice on how and when to write in support of getting this bill passed.

The event kicked off Thursday evening, March 19, 2015, at the Crowne Plaza in downtown Colombus, Ohio where there was a light reception, speakers, and an information table for Adoption Network Cleveland.  Adoption Network Cleveland supports all members of the those in the adoption constellation.  There was an open mic for first parents, adoptees and anyone else supporting the cause. Lots of crying and cheering ensued throughout the evening.  In the corner of the room was a Selfie station for taking pictures and attaching the hash tag #OHadopteesROAR.  There was also a banner on the wall for each adoptee to sign.

Bright and early on the morning of March 20, 2015, we all met in the lobby of the Drury Inn hotel at 7:30 a.m. and walked in the rain to Vital Statistic which opened at 8:00 a.m.  Lots of media and coverage of the event was taking place as evidenced by this event being recognized not only locally in Ohio, but nationally.  Documentary film maker (and adoptee) Jean Strauss had the idea for the group to chant about our birth certificates on our walk over to Vital Stats.  The very helpful staff  at Vital Stats had been planning for this event and many adoptees had pre-registered. Notaries were on hand at the Thursday night event and on Friday morning.  It only took 2 hours for all of the waiting adoptees to make it through the line at Vital Stats.  Adoption files will be mailed to those who requested them and will be received in approximately four weeks. 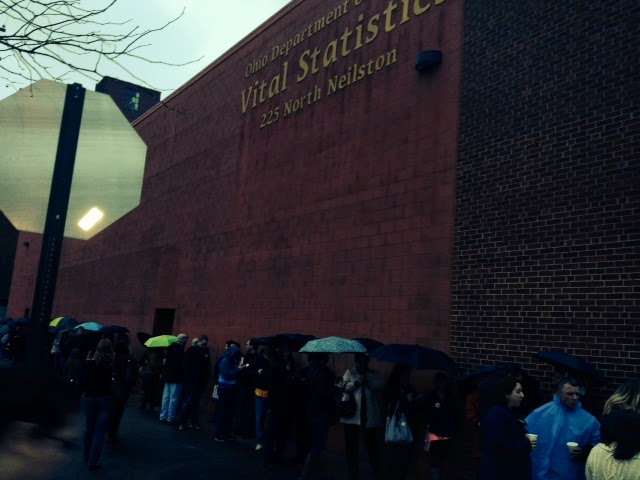 Later on the 20th, there was a formal Adoption Law Event held at the beautiful Riffe building where four adoptees and all those who made this law happen would gather to hear inspiring speeches and would witness the four of the 400,000 adoptees this law pertains to receiving their original birth certificates and adoption files.  One of those adoptees was Senator David Burke (R).  The other three Ohio adoptees receiving their documents were Wendy Barkett, Jeff Costello and Steve Kelly. Senator Bill Beagle was the bill's sponsor. His first and last words at the podium were,

"Thank you for changing my life!"

It is reported that this new law will effect 400,000 adoptees in the state of Ohio.  Original mothers had the opportunity to redact their names off of adoptees' original birth certificates if they desired and reportedly, only 114 out of 400,000 chose this option.  Original mothers who chose to redact were required to fill out an extensive social and medical history.  Critics of the law state that those 114 who will receive redacted documents are still having their civil rights violated.

Karen Pickell, of Lost Daughters, is quoted as saying,

"And even though I’ve had my OBC for nine years now, I plan to download the the adoptee records request form  from the Ohio Department of Health in Columbus when it is available on March 20. I will fill it out, get it notarized, copy my two forms of identification, and mail it in along with another $20. Why? Because I need to see for myself that this process will work for my children–and grandchildren and great-grandchildren to come. This isn’t just about me. It’s about my descendants also having the ability to trace their lineage in future decades."