Exposing the Roots: Family, History, Community and the #CharlestonSyllabus 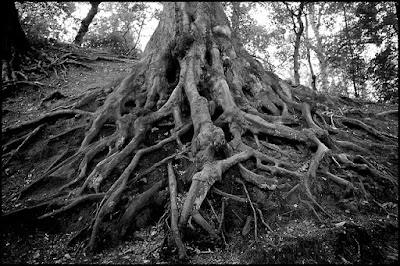 “We who believe in freedom cannot rest until it comes”

The melodies of Sweet Honey and the Rock filled my office on early Thursday morning, as I wrestled with the terrible news pouring out of Charleston. Like many Black Americans, I have been overwhelmed by the spectacle of black deaths and the violence wrought on black bodies. I am worn out by contrived narratives and false allies. I am sick of hearing the deafening silence of my non-black friends and family members. I am sick of watching people dance around the naming of white supremacy. I often feel like I am existing somewhere between enraged, distraught, exhausted, and numb.

On Thursday, as the cords of “Ella’s Song” washed over me, I was struck by how conspicuously historical this act of violence was. Over the last year, many historians, journalists and public intellectuals have done tremendous work historicizing and contextualizing present day race relations, state sanctioned violence, mass incarceration, community unrest, protest and activism. Often times these scholars had to work to show and expose the roots of contemporary racism. Yet some of the roots of the Charleston massacre are already visible, wrapping around slavery, rebellion, civil war, reconstruction and the civil rights movement.

The horrible event happened in Denmark Vesey's church, a black church (like many black churches) that has been a central place of black resistance and community. The act of terror happened in the South Carolina- Birthplace of the Confederacy, a state that still proudly flies the Stars and Bars at full mast. Nine black lives were lost, taken viciously from their families, a day before the celebration of Juneteenth. The attack conjures images of the 1963 bombing of Birmingham's 16th Street Baptist Church that killed 4 little girls. Perhaps more then any event in the last three years, Charleston draws attention to the open and gaping wounds this country has tried to hide behind a post-racial band-aid marked "progress".

I feel connected to this history. I am connected to this history. The roots, glistening in blood, are my roots. As I sat there some where between enraged, distraught, exhausted, and numb, I thought about history. I thought about national history and family history. I thought about my history. In that moment, embolden by Sweet Honey's songs, I rejoiced in my blackness, the collective history of black resistance, and the familiar comfort of historical knowledge. I also felt grateful for my parents- both adoptive and biological, who fostered my historical curiosity, who made sure I loved my blackness, and understood the history of both white supremacy and black resistance.

I am not grateful to my parents simply for adopting me (as far to many people insist adoptees must be) but I am grateful that my parents were and continue to be racially literate. As two middle class white women they realized that while they could understand marginalization as lesbians, they still had huge amounts of white privilege. They encouraged my racial identity development and surrounded me with books, dolls, and communities that reflected by blackness. I grew up in an A.M.E Church. I grew up aware of racism and my moms, and the black adults around me, taught me how to name white supremacy. I am grateful for that.

I became interested in African American history as a way to fill the absences of my biological family. From a very early age, I dove into books, plays and music that taught me a history so often left out of my textbooks. Because my parents made sure I grew up with black adults in my life, I also learned history from the stories passed down through generations of black families.

When I was reunited with my biological family, my mom and dad began narrating our family history. I am grateful for this. I was able to trace my family within the collective history I had eagerly consumed. I traced my roots from Natchez, Mississippi where my Great-Great Uncle, Ben Chester White was dragged by the KKK out of his bed and shot in a (failed) attempt to lure Martin Luther King to Mississippi in order to murder him. I traced my family's roots to their current home in Beaumont, Texas, where, like many places, new forms of segregation, are alive and well.

Understanding American history- a history that not just “includes” (in a little blue textbook box) but can also center on the experience of black Americans, was what helped me navigate the world as a transracial adoptee, as a young black girl and now as a black women and a mother of black kids.

Now as a PhD Candidate at Johns Hopkins, History is also my profession. Like many, I have found some tremendous digital communities across social media platforms. I have watched as #twitterstorians and #blktwitterstorians have used their collective knowledge to better understand and process each new tragic hashtag. Last year, Marcia Chatelain (@DrMChatelain), an Associate Professor of History at Georgetown University, started the #FergusonSyllabus as a way to get historians and other educators “to recommend texts, collaborate on conversation starters, and inspire dialogue about some aspect of the Ferguson crisis.”

Last night Professor Chad Williams (@Dr_ChadWilliams) furthered this call for digital community building and collaborative dialogue by introducing the #CharlestonSyllabus. Professor Kidada Williams (@KidadaEWilliams) and others spread the call across twitter. Many people, including myself, shared titles of books, novels, plays and poems that provide much needed context to the terrorism witnessed this week. Dr. Keisha Blain (@KeishaBlain) has complied the evolving list over at the African American Intellectual History blog.

I encourage everyone to read it. To share it. To speak on it.

As Dr. Chatelain notes, it doesn’t matter if “ you find yourself teaching in a schoolhouse, in your living room with your children, at a community meeting filled with movement members, in a church basement with others who seek racial reconciliation, or in a detention center common room.” The list contains important sources on the history of racial violence and race relations in South Carolina as well as nationwide. They also speak to the long history of white supremacy and the equally long history of resistance. The resources complied provide vital information about the history of this country so we can better make sense of the present and work towards changing the future.

For as much as I see my personal and family history as well as a collective black history in the roots of the Charleston massacre, they are not my roots alone. These bloody, glistening, enduring roots belong to the Nation. We must put away our band-aids and continue to expose them. #CharlestonSyllabus is one attempt to do just that. The roots are there and they will continue to be there, tripping us up if we attempt to move forward blindly.

Amira Rose Davis (@mirarose88) is a transracial adoptee who was born in Texas in 1988 and adopted as an infant and raised by two awesome adoptive mothers in Massachusetts. She has been reunited with her birth parents and siblings since 2009. Amira Rose is currently a PhD Candidate in History at Johns Hopkins University. She lives with her husband and two kids in Baltimore, MD.