Belief Is Its Own Kind of Truth, Maybe -- A Memoir by Lori Jakiela


“I wanted to know something that looked and moved and laughed and loved and was sad like me.” 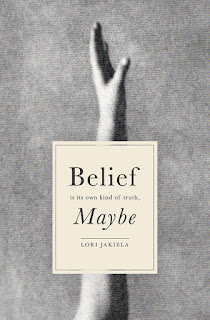 The first thing you should know about Lori Jakiela’s new memoir Belief Is Its Own Kind of Truth, Maybe is that it is not a typical, linear narrative of search and reunion. Jakiela moves back and forth through time again and again as she relates her experience. At first, I felt a bit disoriented by this, but then I realized there is, in fact, a path to be followed through this story as she tells it.

The book tracks Jakiela on her journey to understand the roles of nurture and nature in her life and their effect on her identity. She explores these questions by examining parenthood—motherhood in particular, that of her adoptive mother, her birth mother, and herself. The path she creates for the reader is a map of her own exploration, how she connects the dots between things she remembers, things she learns, and things that are happening in real time.

Jakiela was born and adopted in Pittsburgh in the 1960s. She is the only child of her adoptive parents, who are now both deceased. She is married and a mother of two young children. The book’s story begins in a Catholic Charities office, with Jakiela requesting for the first time information from her adoption file. She would like to make contact with her birth mother.

It’s clear from the start that she is devoted to her adoptive parents and that they truly loved her. She deliberately refers to them as her “real parents” throughout the memoir, leaving no room for questions about her loyalty. She relates many stories illustrating her strong bond with them, especially with her mother, whom she misses terribly.

Yet as she begins to uncover details about her birth family, we learn that she always felt somewhat out of place in her adoptive family, despite there being “so much of my parents in me I barely believe in blood.” As a child, she was always reading, a trait that the people she grew up with considered uppity. Her father thought she was smart, and anticipated that she would meet a good man by going to college. Her mother did not appreciate her love of books, didn’t want her to “get ideas.” She alludes to the arguments they had: “We keep our fights between us. In front of other people, I want her to be proud of me. I love my mother. I want to prove I haven’t been a complete waste.” She recalls her mother once saying that there should be a way to better match adoptive kids’ personalities with those of prospective adoptive parents: “Like things with like things. It would be better for everybody.”

Jakiela has a cousin who is also adopted, and who is obviously biracial, though the family does not openly admit this. She notices her aunt admonishing the girl not to go out in the sun, lest her skin become too dark. In a family photo, she and this cousin stand out, the too-tall girls with coloring that does not match that of their olive-toned adoptive Italian relatives. Jakiela’s blonde hair, green eyes, and Irish ancestry make her feel like a misfit in the group. Since her mother’s death, an aunt no longer refers to her deceased sister as “your mother” to Jakiela. Her father’s father never did consider her a real grandchild.

She has always known her birth name and the name of her birth mother, but had not felt a strong desire to search. Her daughter, however, was born with a serious hip problem that requires her to wear a leg brace. Jakiela also had leg issues when she was born, and she uses family medical history as a reason to reach out to her original family now. It’s only after contact is made that she realizes about her birth mother, “I had no idea I cared so much.”

Her birth relatives turn out to be not at all like the people she hoped to find, and she resists allowing them into her life. At the same time, she begins to make connections between traits she observes in them, in herself, and in her own children. She realizes, too, that “I never thought what it would be like for the others.” She is stunned by the reactions of some of her new-found kin. She hesitates to call her birth relatives “family.”

What I love about this book is that it is so honest about the complications of living as an adopted person. Jakiela demonstrates the real caring that exists between herself and her adoptive parents while also opening up about how difficult it was to live with people who did not look or think as she did. She shows us the barrier she developed against placing too much value on genetic connection, then she allows us to watch as that wall begins to crack. We see her at vulnerable moments, and we see her struggle against that vulnerability. This all rang true for me, as another adoptee who has both found and not found what I was looking for during my search.

Belief Is Its Own Kind of Truth, Maybe does not have a neat, easy ending, but that’s appropriate, I think, since none of our lives as adoptees is too tidy. Jakiela has penned a complex narrative that suits a complex life. Neither the story nor its telling are simple, but the read is worth the effort.

Note: The author provided a copy of this book in exchange for a review.