I'm not who they say I am


I was born as Soojung in a country that looks, sounds, and smells very different that the United States.  As part of my adoption at age 3, I was renamed Raina, and that is the legal name I still use in everyday life.

Raina is a unique name, and I've never met anyone with the same name (although I've heard of others including Raina James from that Nashville show, and I've had 2 other Rainas named after me!).  As a young child I asked my mom why she chose this name, and her answer was simply that she liked the sound of it.  I searched for it in baby name books and--later when the internet was invented--online, only to find it was a possible derivative of the Spanish word reina, or queen.

Soojung seems to be neither common nor uncommon in Korea.  A couple years ago, after reuniting with my Korean family, omma told me the story of why she chose this name.  She became pregnant with me through an unthinkable ordeal, and she wanted a name for her child to transcend those origins.  Soojung means crystal in Korean, and it was an aspirational choice.

Names are such a personal thing.  I see in my own children how to some degree their identities have formed around the names we gave them.  They, like their names, are unique, bold, confident, and racially diverse.  Whether we love or hate our names, they become an internalization or extension of our identities.  When we name our children, we exert tremendous and lasting influence on them.

First, adoptive parents have not only been deprived of biological creation, they are also denied the associate joy of naming their own children.  While the adoption process can't remedy the biological aspect, it does allow for a proxy of creation through re-naming.

Second, naming is a way of exerting possession.  It's a way of forming a bond: Once this child has my name, they are mine and I am theirs.  As long as they retain the name given to them by someone else, that bond stands between us.

Third, in some cases perhaps the child's name doesn't fit into the adoptive family's own identity.  The name is too "ethic," unique, or hard to pronounce.  The name doesn't reflect or honor the family's lineage or traditional naming conventions.

I don't know if infants bond to their names right away, although they might.  In my own experience, I was given and called a name for three years, and I formed some sense of identity around it.  That identity, along with every other aspect of my life prior to arriving in the US, was discarded so that I could assume a new life, identity, and culture.  I believe that experience was damaging to me, and is likely to be damaging to other children.

On the flip side of the argument, the name that mom gave me established a bond between us.  It allowed her to connect more closely to me, and I knew that she had specially chosen that name for me.  I also believe that my life in the US may have been more difficult if I'd been raised as Soojung in the town of Shepherdsville, KY.  I'll never know.

I'm intensely happy to know that omma named me with great love and thoughtfulness, and the name Soojung is like a secret, true identity I always carry inside.  I'm happy that mom gave me a name as a way of embracing me into her family.  I'm also heartbroken that I lost so much of my original identity and history when I lost my Korean name, and I don't particularly care of my American name.

For an adoptee, something as simple as a name, which many take for granted, can be a complex and emotional issue.  I'll never fully realize either of my names, because they are separate aspects of me and my journey.  I'm neither Soojung nor Raina, and yet I'm both but not fully.  In some ways my names feel like those of an actor who has assumed some identity for an audience, but who can slip into another. 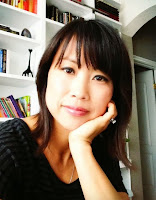 Soojung Jo is the author of Ghost of Sangju, and has contributed to several adoption-related anthologies. She has an American family that raised her and a Korean family that lost and found her. Both families met in 2013. Find her at www.soojungjo.com or on Facebook as Soojung Jo.
Posted by Soojung Jo