This year has been marked by losses. As a community, we are reminded that we are fragile. In the month of May we lost Jane, Gabe and Phillip.

You see, adoptees die both figuratively and literally. 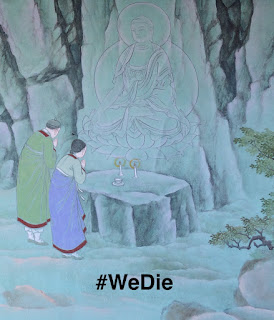 We die when we realize that we are not truly a part of those we resemble. We are outliers. We never chose this for ourselves.

And yet, in the month of November, this institution that brought us to our new “homes” is celebrated and revered. In this celebration, our voices have died. In 2014, we tried to revive with the #FliptheScript on #NAM. We were successful to a certain degree.

However, since that time, we still see our fellow adoptees take their lives.

What if, we took this month to honor those we have lost as well as the parts of ourselves that we miss.

If you feel the urge to share on social media, tag it with #WeDie to remind us of our community of adoptees.

Feminist columnist, Rosita González is a transracial, Korean-American adoptee. She is married to a Brit and is a mother to two multiracial children. Rosita was adopted in 1968 at the age of one through Holt International. Her road has been speckled with Puerto Rican and Appalachian relatives and her multiracial sister, the natural child of her adoptive parents. While quite content with her role as a “Tennerican,” her curiosity has grown recently as her children explore their own ethnic identities. She considers herself a lost daughter, not only because of the loss of her birth family, but also because of the loss of her adoptive parents. After the death of her adoptive father, she discovered that he had fathered a Korean son two years before her birth; she is searching for him. Rosita recently returned from a five-month stint in Seoul, South Korea, with her family and their three cats. Follow her adventures as an adoptee on her blog, mothermade.