My husband and I went on a weekend getaway to Pittsburgh a few weeks ago. We were walking through the strip district; walking....walking......walking. We were looking for a place to eat but passing countless establishments and vendors. After hearing a few of my husbands explanations of why we couldn't eat here or why we couldn't eat there, I realized that we was searching for just the right place that he thought I would be most comfortable and enjoy. Yes ladies, he is that sweet and he's alllll mine! He knows I am not picky, he was just being kind. I ultimately told him that wherever was fine. I was happy standing on the sidewalk eating BBQ chicken purchased from a vendor along the street. And it was good. It was nice being considered because I never expect anyone to do that. I am a self-reliant person. I have always felt like I should try to adapt to where I am, not ask or expect it to adapt to me. There is a difference between trying to belong to where you are (but still feeling like you don't quite fit in) and feeling like where you are belongs to you. 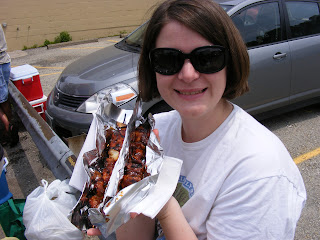 yummmm!
I grew up in a small seashore town that doubles as a bustling resort area in the summer, quickly deserted by all but the locals in the winter time.  I spent my summers at the beach nearly every day; when I wasn't swimming in the cold Atlantic waters, I was knee-deep in the marshy muck, looking for fiddler crabs and other creatures.  I was very athletic while at the same time somewhat bookish.  When I wasn't working, I spent most of my time at sports events, reading, or shopping.  When I wasn't with friends, family consisted of mom, dad, and me.  I had a lot of quiet time where I sat, listened to music, and drew with pastels on enormous pieces of paper.

During my senior year, I stayed for several days in Manhattan in New York City with my classmates in a fancy, penthouse suite.  We put on our best clothes and went to Broadway after dining at Tavern on the Green.  We went window shopping at the fanciest stores, relished our freedom as we hopped from cab to cab, and gasped in delight as snow began to fall and decorated the beautiful city even more.  We spent late nights drinking lattes and eating over-sized pieces of pie at a fabulous cafe.  This was my first time to New York.  A small town girl in a big city.  And I loved it.

Later that same year, my classmates and I did a service learning project in Arizona.  Here we slept several to a room in a boarding school in the Navajo Nation where there was no hot water and spent our days hours away from the nearest town in the middle of a canyon in the blazing sun, listening to stories and climbing rocky walls looking for fossils.  I cleaned, I hammered, I painted, I carried things, and I looked after children.  When our trip was over, I was sad to leave.

Again later that year, I traveled to South America, this time to see the young man I had been dating for quite some time in his home country/town.  His family lived in a wealthy neighborhood and was planning to move to a different house, giving my suitor and I their family home as a gift (which I declined as the relationship ended a few weeks later).  They had employees who cooked and cleaned and did laundry.  I don't recall lifting a finger while I was there.  I spent a lot of time sitting on the balcony looking out over the mountains and buildings that dotted the hills.  I spoke in Spanish with his friends and family.  I was sure I could see myself living there.

When I reunited with my first family and went to New England to visit them, I was greeted by an enormous family, aunts, uncles, and cousins, who had all grown up together.  They live in a very cold climate where the snow in the winter reaches outrageous heights.  They love to camp and to fish.  Especially ice-fishing which the older of my two younger brothers loves to tell me about.  The wood stove crackles gently at night while giving the house the most comforting heat, and they have neighbors that will do anything for you.  I think I would have liked growing up there just fine.

As I continued on into my 20's, I one day conscienciously asked myself the question "wait a minute, Amanda. What belongs to you?"  A chameleon, always adapting to my surroundings....what things do I like?  Where do I want to be?  What do I want to do?  This is what my 20's, and thinking critically about adoption to discover how it has impacted my life, has been about.  It is about finding who I am and making a place for myself where I always belong.  My husband has been my partner in that, accomplishing this goal together as a family.  In our little Victorian house, we're creating our "territory" where we don't have to try to fit in, because we already belong.
Posted by The Declassified Adoptee