"Our death is not an end if we can live on in our children and the younger generation.  For they are us, our bodies are only wilted leaves on the tree of life."  ~Albert Einstein

My maternal Grandmother had a massive, more than likely fatal stroke over the weekend. I sobbed when I found out. I did not know her, yet I grieve.

I grieve for my Mother, because she is weak. I grieve for myself, because I was weak. I was too afraid to lose my Mother if I told her secret. I grieve because I lost my mother twice, yet I kept her secret from her Mother, and got nothing in return. Nothing except a slap in the face, much more cruel than the slap on my bare naked baby ass when I gasped for my first breath of air.

I grieve because I can't send flowers when she dies now, can I? "With love, your secret Granddaughter." I grieve because I cannot send my Mother a card. And I certainly cannot go to my Grandmother's funeral. Honestly, I couldn't handle that funeral. I mean, how does one behave at the funeral of a family member they never met? "Oh...she looks so peaceful. Hey, look, everybody, Grandma has my nose, and orange lipstick looks bad on her, too!" And then of course, there would be all of those poster boards with pictures of all her kept Grandchildren. That would be swell, huh?

I grieve because no one seems to be sure if they should talk to me about it. Me- this stranger-baby-all-grown up. I grieve because I don't know how I am supposed to feel. Grief is nothing new to me. But every time it hits me, it is as fresh as the smell of funeral flower arrangements with the sweet undertone of formaldehyde.

If you're a regular reader of my blog, you know I'm not religious. But I like to think that wherever she goes when she passes, my Grandma Johanna will know the secret. I imagine my Grandpa running up to her and saying, "Ooooh, girl- you are not even going to believe this!", and then my Grandmother replying, "Well, that daughter of yours, she was always a sneaky one!" But that's just my imagination, because in reality, I have no idea what they would say...you know, because of that whole adoption thing.

I do know she is as Irish Catholic as they make 'em. I also know that even if my Mother had gone to her when she found out she was pregnant with me, the outcome would have been the same. My Mother and I were both ruined through redemption, really. Pray, sacrifice, and give those nuns your baby. And never tell your secret.

I drank a glass of Guinness and made a toast to my secret Grandmother Friday night. 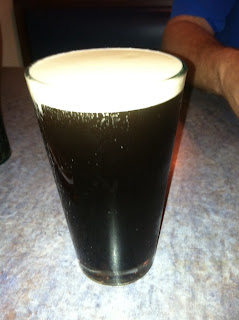 "Boy, when you're dead, they really fix you up.  I hope to hell when I do die somebody has sense enough to just dump me in the river or something.  Anything except sticking me in a goddam cemetery.  People coming and putting a bunch of flowers on your stomach on Sunday, and all that crap.  Who wants flowers when you're dead?  Nobody."  ~J.D. Salinger, The Catcher in the Rye, 1945
Posted by Real Daughter