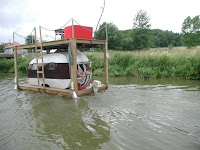 Does adoption ever feel a bit like this photo to you? A bit thrown together, improvised out of what lies to hand, plenty of crossed fingers, quite unique and with hope that it will all turn out alright?
This little craft 'sails' the mighty River Murray, as important a river for us as the Mississippi; once crowded with Paddle Steamers and all manner of commercial crafts.These days none of the commercial boats remain except for the holiday vessels, some new Paddle Steamers and some old ones, lovingly restored. One of those is akin to a member of my family, much loved and visited, if only occasionally these days, but still awash with childhood memories.
After my beloved aGrandfather died when I was a small child we went for a week's break - his second wife, Mum and I. It wasn't the first time for the others and held fond memories, being the venue for my aGrandfather's second honeymoon.
We were numb with grief, it was a distraction and a rest after the hard work of nursing him at home for his final months. I remember distinctly, the feeling of loss, almost palpable, the emptiness where he used to be with his quiet humour, his kindness, gentleness and his unfailing compassion. He was my hero, everything a Grandfather should be, a teacher, protector, champion, comforter and safe unfailing presence.
I knew he was dying, sat with him daily and was part of his dying, the fading away and eventual coma. It was the most significant loss I had suffered since the loss of my mother and the first I could articulate. It must have resonated, although that was never acknowledged. Perhaps being able to grieve at such a young age helped the first grief, made grief a known process and a familiar one.
So much to grieve for in adoption, so much loss and so much which is at odds with everything else. It is a strange and cruel thing to take a child's identity, replace it with another and provide a new and different history, connections and life's agenda. I know only that living my adopted life would have been so much harder without the influence of my aGrandfather. His example and lessons lasted, where other things were ephemeral, transitory or shallow.
Today, I have the comfort and privilege of having introduced my beloved Godson to the Paddle Steamer of my childhood. He loves it too, it connects our familes, fires his imagination, is part of bringing things full circle, connecting my childhood to his and the love I had for my Grandfather to the love he had for his and the experience he has just had of the death , at home, of an inspirational Grandfather.
The comfort of belonging and connection, something adoptees often have to make for themselves in the most difficult of circumstances is something to be grateful for and what being a grateful adoptee is really about for this adoptee!
Posted by Von