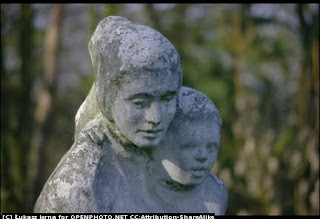 Oftentimes, "adoption reunion" seems to be referred to as a permanent state - such as, "I've been in reunion with my mother for 26 years." Now that I'm living through the demise of my own "reunion", I see things a little bit differently.

If you ask me now, I would say that the "reunion" with my mother happened at Chicago's Midway Airport six years ago, when we embraced after seeing each other for the very first time since I was born 35 years prior. We ran outside for an immediate stress-relieving cigarette. At that point, looking back, we weren't "in reunion". Not really. We had already reunited. What we were was two adult women with a painfully obvious biological tie attempting to get to know each other and forge a relationship that was comfortable for both of us. That's different to me.

That's not to say that I'm trying to deny the uniqueness of the relationship that forms between adoptees and biological family members that meet again after years of separation. But I wonder how often that "reunion" label might actually cause some problems.

In our case, hanging onto that "reunion" mentality gave my mother and I unspoken permission to sabotage our own relationship.

I used it as an excuse to devalue myself. I was the "reunited" daughter - the one who surfaced unexpectedly after a long absence. Therefore, despite my natural family's attempts to bring me into the fold, I separated myself. You know, because we're "in reunion", so it isn't the same, no matter what that family tells me. Right? "In reunion" implies a state of non-permanency. It could go either way, and we ever-vigilant adoptees have to be prepared for the worst.

My mother used "reunion" to beat herself up. She never was really able to accept that I simply saw her as my mother. The fact that we were "in reunion" reminded her of the 35 years that she wasn't around. Every mistake she made in our relationship turned itself into what an awful non-mother she was, in one way or another. She would disappear physically and emotionally at times, seeing herself as disposable.

Perhaps if we'd managed to not lose sight of the bigger, simpler picture, things would have worked out between us.

She is my MOTHER. I am her DAUGHTER. We are FAMILY.

Denial is never, ever a good thing.