The Trouble with Sharing Things 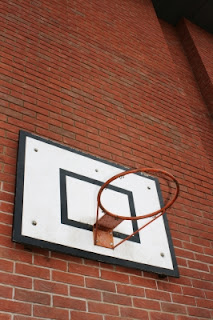 I was at the gym the other day doing some horrendous exercise, reminiscing on the days when I was fit and athletic.  I started thinking about my basketball days and other memories from high school.  I loved basketball and was a good player.  An unavoidable part of thinking back on my sports days is remembering a coach I didn't really get along with.  I liked her at first.  She was friendly, hip, and pretty.  But she was too friendly with the boy's head basketball coach, who also became our assistant coach.  He was also a deacon at my church and the father of a boy I had been good friends with since we were toddlers.  I don't know exactly what happened or if the male coach was confronted by my church leaders or not but he ended up leaving our church, taking my long-time, childhood friend, his son, with him.  I was devastated.  I don't know if they were actually having an affair or not but their public flirtatiousness in front of students and athletes, and me, made me uncomfortable and in true Amanda fashion, I voiced my discomfort.  Of course, they didn't like this.  I was one of the star athletes of the team but one of the least favorites (though it would seem).  I was captain of my team for two years, the All-Star team captain, I was All-Star, All-Conference First String, and we had just won an All-Star game where I had scored triple-doubles.  The coaches congratulated everyone but me.  My father, aware of what was going on, stepped in and said "uh coach, you forgot someone," before she finally gave me a high-five.  By the time I graduated high school, I was so sick of basketball that I turned down a full-ride scholarship to a good school with a good basketball program.  I shouldn't have let the behavior of my coaches and the drama effect me so much, but it did.

You would think that the last place that I would accept relationship advice from would be my basketball coach.  But I always, always remember something she told me.   I still think of it to this day.

She was trying to get team mates who were also school friends to foster better relationships between themselves, to strengthen the team.  I thought that the coaches, who were both married to other people, not hanging all over each other in front of 14-17 year olds would have been a great start towards building teams spirit--eh, but what do I know?  I wondered how a woman so oblivious to the impact her own behavior in her own relationships had on others, could dish out such good advice about other people's relationships.

Her words came back to me a few years later as an adult when I started to think about relationships and support.  If I vented to my mom or a friend about someone or something else, they would get all upset on my behalf.  I would later work it all out and feel better but how much better did they feel?  They didn't get to work out their emotions about the situation in the same way I did.  I decided to be more careful about what I share when I am angry or upset--or how I share it, rather.  Not because seeking support and confiding in others isn't important but because while I expect them to care about my emotional welfare, I should care about theirs too.

This is when it gets rough when it comes to adoption reunion and integrating two families into my life.  My adoptive parents are Facebook friends with my first mom and several of my aunts.  They send cards back and forth for holidays and occasionally email each other.  It is important to me that they have good relationships because I would never want to be in the middle of a disagreement.  Too often do adoptees feel in the middle of choosing between their nurturing family and their natural family and I don't want to go there.  But I lose an important source of support.  I can tell my adoptive mother lots of things and normally do.  But I am hesitant to share anything with her that is challenging about reunion because I do not want her to harbor negative emotions against my first family.  Likewise, I can tell my first mom loads of things.  But I am hesitant to tell her things about my childhood that might have been hard or times where I am upset with my adoptive parents, because I don't want her to harbor negative feelings against my adoptive family.

This is why I have found it so helpful to find the support of other people who are adopted, also being mindful of their emotions as well.  I think it is important to have positive relationships where you can support each other and be mindful of each other's emotional needs and boundaries when supporting one another.  I am glad that I have that with my friends.

Does anyone else have trouble sharing things with either one of their mothers?  or both?