The Inequality of Women and Adoptees: We're Never Quite Fully Human 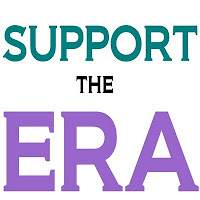 By Amanda
I remember when I first found out that the United States Constitution does not recognize the equality of women.  An amendment to the Constitution has been in existence for decades and has been pushed aside continuously.  I thought, "this must be an oversight!  No one really believes that women aren't equal any more...do they?"  I started to realize it was hardly an oversight as I grew up hearing objections to why people do not support an amendment that recognizes the equality of women in the Constitution...

"Oh, well of course I believe women are equal but I don't support them being constitutionally recognized as such because....."


"wouldn't the professional sports teams have to include both genders?  I'm sorry, but sports wouldn't be as enjoyable for me any more if there were women playing alongside men."


"I want the least female involvement in the military possible."

"they would compete for all of the higher-level positions held by men. Who would be doing secretarial and sales work? Those positions need to be filled too, you know."

"women need a lot of time off from work for having babies and child care and stuff.  Equality means we'll have to force employers to give equal pay when it wouldn't really be fair."


"I don't want there to be an opportunity for women to make 'bad decisions' and policies for themselves, like the right to access abortion services or free birth control."

You may or may not have heard these things, similar things, or completely different objections altogether.  We have some basic themes implied here:
In other words: women are not seen as being fully human.  Full humanity is equality; the same rights for every person, regardless of what diverse group they may belong to.  The feeling you get when people view you as pretty close to equal....but not quite, is a sinking feeling, an anger, a frustration, a deep sense of injustice.

Being told being adopted makes you unequal conjures the same feeling.  Here we look at some objections to adoptee equality (meaning, wanting the same access to your original identity and original birth certificate that all others receive) that you might hear a legislator or an anti-rights group say:

"Well, of course I support adoptees, but if we gave them equal access to OBCs....."

"they would 'bang down' the doors of their original mothers and 'disrupt' their lives."


"pregnant women would all have abortions instead of choosing adoption if they know adoptees can access their OBCs whenever they want.  Adoptees should just be grateful they weren't aborted."


"no one would want to adopt any more.  People don't adopt for their children to be recognized as members of another family.  They adopt to build their own families.  This would catastrophically impact adoption rates."

Here we see some basic assertions and themes made about adult adoptees:
There is a quote in the movie "Iron Jawed Angels" that I love.  "Go home to your mothers!" someone from the crowd shouts at women marching on Washington.  "My mother is here!" a woman shouts back.

The response to undrafted, unaddressed, and unpassed Adoptee Rights bills is perhaps the same to the response to the unratified ERA: "you are basically equal.  Is it really that big of a deal?"  Some fields are becoming less gender segregated, and in some, women earn near enough as men.  Women are surpassing men in some areas of educational attainment.  We can vote and hold political office; we have a voice in government.  Women are almost equal, say some, does it really matter whether or not it is recognized by the Constitution?  In the eyes of others, all adult adoptees are lacking is a "piece of paper."  We're pretty much equal other than that, so what's the big deal?  They fail to recognize that if that "piece of paper" were accessible in all 50 states, then it would become common knowledge that OBC access has nothing to do with abortion or adoption rates or adoptees having a higher likelihood of disrupting other's lives: those not quite human stereotypes would likely, hopefully, go away.  Women are pretty much equal and what stands in the way of adoptee equality really isn't that big of a deal, some say.

If it's not a big deal, good, this should be simple then: PASS THE BILL.

**My purpose of mentioning this is to say what are speaking for mothers.  I acknowledge that this is not necessarily how mother's feel themselves.
Posted by The Declassified Adoptee