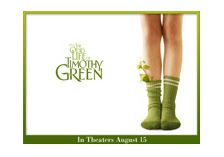 A new Disney movie, The Odd Life of Timothy Green, opened in theaters this week. I saw the film's preview several times in the past month, and I have to tell you, I had a very strong reaction to the premise.


". . . an inspiring, magical story about a happily married couple, Cindy and Jim Green (Jennifer Garner and Joel Edgerton), who can’t wait to start a family but can only dream about what their child would be like. When young Timothy (CJ Adams) shows up on their doorstep one stormy night, Cindy and Jim—and their small town of Stanleyville—learn that sometimes the unexpected can bring some of life’s greatest gifts."

In the preview, we see the young couple seated across from a doctor who seems to be breaking the bad news that they won't be able to have children of their own. Then we see them scribble a wish list for their child onto scraps of paper, which they place in a box that they bury in their backyard. Lo and behold, some time later a child appears on their doorstep. Apparently he sprouted from their wishes buried in the garden. He has stems and leaves growing out of his ankles to prove it.

No doubt Disney intends this to be a feel-good, tearjerker of a movie. The preview alone almost moved me to tears, though not the feel-good kind. I immediately felt anger rising up in me at the idea of an adopted child being portrayed as sprouting full grown out of nowhere, with no messy past to deal with, no biological ties to worry about.

Sorry, Disney, there's nothing magical about being an adopted child. We weren't created just to fulfill the wishes of perfect couples struck with the misfortune of not being able to conceive. We do have pasts. We came from somewhere, from someone. One of the first things that happened to us was being removed from everything we knew and being placed into a completely foreign situation with strangers. How dare you reduce our tremendous loss to a little dirt disturbed in a garden!

I don't think I'll be able to stomach watching this movie, but I'd love to hear from other adoptees who do. Let me know your reaction to this "magical story" in the comments here.