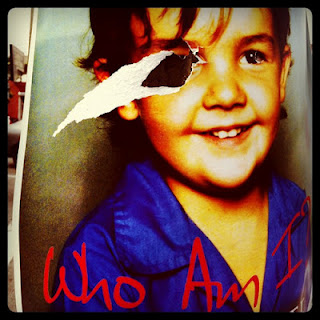 When I decided to pursue writing as a vocation, one of the earliest struggles I went through was deciding what name I would publish under. Many writers consider using pen names to protect their privacy, and privacy was one of my considerations as well, but the question of a name went much deeper for me.

By this time, I had reunited with both of my birth parents. I knew that my birth mother had named me. I had a copy of my original birth certificate proving that the name she gave me was mine. I also felt a strong connection to my birth father's ancestry even though his name is not listed on my OBC.

I briefly decided I would publish under a moniker combining these two names. I would become, if only on paper, the person I could have been if I had been born in a perfect world where my birth parents had been a happily married couple and had raised me together.

To be clear, I understood that the "perfect couple" scenario had no relationship to reality. My using this pseudo-birth name did not mean that I wished they had been a couple or that I harbored some kind of delusional fantasy about them one day getting together. To me, the name signified who I was rather than who they were. It was my declaration that I came from them, that I was a part of each of them. I liked the way my new name tasted when I let it roll out of my mouth. It tasted like the essence of who I was. It connected me not only to my birth parents, but to my grandparents, great-grandparents, and all of my ancestors.

But I never told anyone besides my husband about that poem. How could I? Everyone would question why I chose my pen name, why I didn't want to use my "real" name. My adoptive family would want to know why I didn't use my maiden name, the surname they gave me. My birth mother would ask why I hadn't used the whole name she gave me at birth. My birth father might think I was trying to align myself with him in some unscrupulous way.

And what would people call me? If I ever had the good fortune to be able to read my work in public, I would then have to answer to my pen name, while in private everyone knew me as Karen.

Should I legally change my name, so that everyone could call me the same thing? I couldn't imagine my husband ever whispering a new name into my ear at night, or my children explaining to their friends and teachers that Mom decided to call herself something different.

To be honest, my pen name didn't feel exactly like me. It certainly felt like an important part of who I am, but it didn't include all of me, because I'm not just the child of my birth parents. I'm also the child of my adoptive parents, the wife of my husband, and the mother of my children. I'm a relative and friend and colleague of many others as well, and all of these people, including my birth family, know me as Karen. This is the name I've known myself as since as far back as I can remember. This is the name that feels most like me.

As for my last name, I could have chosen any old name if I just wanted privacy. My adoptive maiden name reminds me of a girl I once was who I no longer am. None of the other names I might have gotten from my birth family quite fit. The truth is, the place I feel most at home is with the family I've created myself. The surname that suits me best is the one that's legally mine, given as a gift from my husband.

Why did I make things so complicated by trying to hide behind a pen name when my everyday name works just fine? I guess because deep down I knew I would have to write about my experience of being adopted and all the very private feelings that go along with that. I knew my friends might read what I wrote. My parents might read it. Some people very close to me might not like everything I had to say. It would be so much easier to hide behind a pen name and not have to face any negative reactions people might have to my very strong opinions about adoption.

But much of the pain that comes with adoption is created by secrets, and I didn't want my current identity to become another thing I had to hide. The whole point of writing about my experience is to be open about what it's like living as an adopted person. How could I truly be open if I tried to keep my real name a secret? I realized I couldn't.

I also realized that I had to let go of the fantasy person my pen name belonged to. She never really existed and she never will, even though my birth parents always have been and always will be a part of me. Ultimately, I am a combination of the genes I inherited and the life I experienced. Reuniting with my birth family left me feeling split into two, sometimes three, different people at times. I needed to be whole. I can't be anyone but who I am right now.

Using my everyday name means I'm declaring to the world "I am adopted and this is what I think about that," which is scary, but also empowering. I am standing up for myself and choosing the life I want to live.