Adoptee Names (or) Things are Never Simple in Adoption--Part 1

New Round Table: Do you go by your adoptive name? Married name? Have you ever considered changing your name? Why or why not? What significance, if any, does the name you use carry for you? 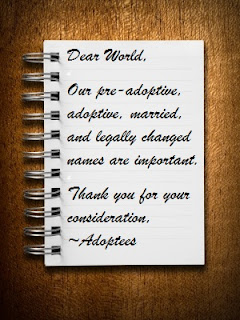 Jenn -- I currently go by my adoptive name, because it's all that I "legally" have. Once I get married, I'm taking my fiancé’s last name. For me it was a no-brainer. I don't feel connected to my current last name. It's Irish, and I don't have one drop of Irish blood. More often than not, people look at me and ask me where my last name comes from because they can't figure it out. So I'll be taking my fiancé’s very ethnic last name so that when people ask, now I'll be able to say that it's through marriage. And I don't think people are going to ask as much. His last name looks like it fits more. In terms of changing my name, I've thought about it but probably wouldn't do it. My natural father's last name isn't a family name (it's a long story and not mine to tell). Taking his name would be like taking any random person's name. If anything I've thought of taking my natural mother's last name (which was mine for all of six months) but seeing as I'm not included in that family, I think I'd feel funny about it. I'm good with my fiancé’s last name. At least our kids will have an "authentic" last name!


Von Coates -- I've had 5 last names. Long story. I use my real name in Adoptionland where it's real.

Amanda Woolston -- I am in the process of legally changing my name. I will be adding my biological paternal and maternal surnames to my middle name and adding my adoptive maiden name to my married surname as a hyphen. By the time I was one year old, I had three different first and last name combinations; you can count a 4th when I was married and took yet another surname. Changing my name will be to express how I identify. And it will be a name that I choose.


Laura Dennis -- That’s very cool, Amanda. Before Lost Daughters, I’d never considered changing my name legally. I’m not sure my first-maternal grandmother would be too thrilled with me “joining the clan” publicly.


So, I approach the “name issue” from a different angle. Ten years ago when I was still "emerging from the fog," the subject of my name was very important to me, unnaturally so ... or so I thought at the time. In 2001, I was planning on getting married at age 23 (just after reuniting and to a different man than I'm married to today). The fact that I refused to change my last name was a big sticking point for my then-fiancé. But, I refused to let it go.


I felt that although the name given to me by my first mother was kind of a place holder name, "Dennis" was the only connection I had to my adoptive mom and adoptive brother. This connection became especially important as my adoptive parents pursued a divorce. Perhaps it had more to do with so-called feminism--i.e. not adhering to the patriarchal tradition of giving up one's name. However, it seemed that I’d lost my name once; I'm not giving up this one.


Also, subconsciously, I believe I understood how arbitrary adoption is. My adoptive family was like Real World, "Four strangers are picked to live in a house" ... that was my house. And, I wanted to keep that connection to them. Funnily enough, this act, for once, wasn't about avoiding disappointing my (adoptive) mother. Personally, I think she should have switched back to her maiden name, but I think she keeps Dennis for some of the reasons I do.


Rebecca Hawkes -- Ah, names! I have always used my adoptive family's last name legally. I happen to like it; I'm attached to it because I formed my identity with it growing up. Publicly, in my local community and on Facebook, etc., I use a hyphenated name that combines my legal name and that of my husband. It's the legal last name of both of my children -- I use it because it connects us as a family. "Hawkes" is my pen name. I use it for my blog and for participation in the online adoption community. I chose it because it happens to appear in both my adoptive and biological maternal lines. As such, it connects those two parts of myself.

Karen Pickell -- After I reunited with my birth family, I felt conflicted about which name(s) to use. I finally came to the conclusion that my married name is the one that feels most like me--I wrote about how I made my decision back in September, The Perfect Name.


Deanna Doss Shrodes -- When I got married, I dropped my middle name and used my maiden surname as my middle name and my married surname as my last name. It's that way on all most all my legal documents now including driver’s license, passport, etc. I did that for several reasons, none of which had to do with adoption. Since coming totally out of the fog and being public with it, I definitely would consider a name change and have even discussed it with my husband. I would do as several adoptee friends have done and my name would be: Deanna-maternal surname - paternal surname - Doss Shrodes. There is only one issue with this - I do not know my paternal surname. I also like my previous first name which is Melanie but I don't know where it would fit in the mix.

The significance for me would be taking back what was taken.

Nikki -- Like Deanna, when I got married, I dropped my middle name and used my maiden surname as my middle name, and my husband's surname as my last name. That was almost twenty years ago. A little over three years ago, I found my original family; and about sixteen months ago, I legally changed my middle name to a hyphenated combination of my mother's original last name and father's last name.
I made the decision to change my name because I wanted my name to FULLY reflect who I am.
My first name is the name given to by my adoptive parents, and connects me to the family in which I grew up. My last name connects me to my husband, his family, and the family we have formed together. And NOW my middle name connects me to both sides of my original family -- a family to whom I've grown close and feel very much a part of. For me, including their name, MY name, was a meaningful and symbolic way to regain a piece of what I lost as an infant. It was a choice made by ME! And like Julie said, it was incredibly empowering. I love my new name, because it best represents who I really am.


The day after my name change was finalized in court, I received a package in the mail from my mother. It was a very cool messenger bag with my new initials monogrammed across the front. She was just about as excited as I was that part of her name was finally also part of mine. Only took about forty years.


Liberty -- I thought about this a lot when I was engaged. I kept all of my names--first, middle, and last (adoptive), as well as adding my husband's name. I felt that adding his name did not disempower me, but rather empowered me by choice.

I added it because I could.

Check out Lost Daughters tomorrow, for more perspectives on adoptees and their names.
Posted by LauraD