Hey mom, they don't see your little girl, they see an Asian woman...

When I was a little girl, it was obvious that I was adopted, because I was most often seen and understood within the context of my White American family--whether out at a restaurant or in elementary school. People interacted with me with the understanding that I was the White couple's little Asian daughter.

But once I began to get out into the world, further away from the shelter of my White parents and eventually became an adult, there was no longer the context of my White family everywhere I went.
And even now, when seen with my parents or my brothers, as an adult, it is no longer obvious that I am adopted. I am mistaken as a girlfriend or wife when with my brothers or as a daughter-in-law when with my parents--or even completely ignored as unconnected to my parents, seen as a stranger that just happens to be standing unusually close at the checkout line or at the department store.

Where this difference becomes particularly significant is in regards to the way other people view me, and therefore their treatment of me due to the (understandable) assumptions they possess because of my outward appearance, i.e., race. 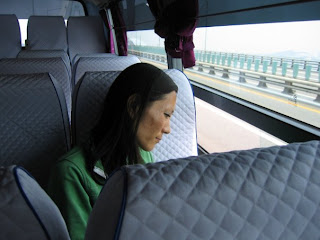 They see an Asian woman--no longer a cute little Asian girl adopted so kindly and charitably into a White American family--who is not American but rather who must have Asian parents, Asian customs, Asian language, etc.

I am not American. I am a foreigner. I am not one of us. I am one of them.

The only problem is that I am neither one of them nor one of us. I am both. But because there is no longer the context of my White American family everywhere I go, as there was when I was a little girl, others have no way of knowing or understanding that I am not who or what they assume I am.

So, they treat me according to what they assume from my appearance. I'm not playing the violin here. It is what it is--I have to accept it and deal with it. It's fine. It ain't going away. But my point is that it's part of the daily reality--the daily dissonance--of being a Korean person who was adopted into a White family.

And now that I have been in reunion with my Korean family for 4 years, this identity dissonance has only become more convoluted and confusing to manage at times.

Ultimately, I do feel more American than Korean--most days. If I'm honest with myself (as much as it might make me cringe at times)--my culture is strongly that of White America. Obviously, I am less connected to my "Koreanness" as a result of being raised by White people in a White world. Yet the very fact that the White world views me as Korean forces me to connect with my "Koreanness," and of course, being in reunion with my Korean family also somehow "makes" me more Korean.

But when it comes down to it, I'm American to Koreans, and I'm Korean to Americans. But who can blame them? I mean, honestly, when I see another Korean woman, I don't think to myself, "Hey, there's someone like me!" Rather, I feel a complete disconnect, sometimes even an aversion. And  I experience the same reaction when I encounter White women. I don't feel like either one is "my people."

It all feels so messy.

I don't even know how to put into words most of the time or how to explain it to others.

Ultimately, I experience the racial and ethnic dissonance created by my "adoptedness" every single day of my life. But it's such a silent, isolated struggle, because no one can see my "adoptedness." And there's the added paradox of not really wanting others to know that I am adopted, and yet wanting everyone to know it.

This is just one of the many ways that I am reminded daily of the fact that I am adopted--and of all the loss and division and pain that comes along with being adopted transracially. And now, that I have a son and a little girl due this summer, the pervasive repercussions and dissonance of being adopted only become all the more salient, poignant, undeniable.

When I was a little girl, it was easy to be naive to the way the American world viewed me. It was easy to be oblivious to the loss, the grief, the harsh realities of how being adopted affected my life.

But now that I am an adult, I cannot escape it--not for a moment.
Posted by Mila