(Part 1) Internalized Adoptionism: What racism has taught me about adoption 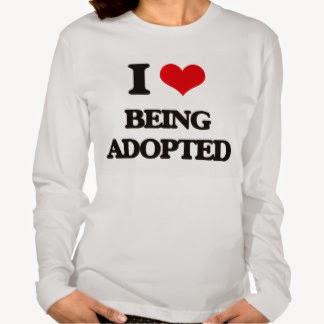 A couple of months ago, I read an astute article about internalized racism by Amy Sun called, On Internalized Racism: 4 Lessons I Learned as an Undercover Asian. This article articulates precisely what I have felt and experienced all of my life as an Asian person living in a White World.

The article has also helped me with another realization:

My experiences of race and adoption are inextricably intertwined.

I cannot talk about my racial experiences without talking about my adoption experiences and vice versa. Furthermore, developing a framework for understanding and coping with racism has also helped me to do the same in dealing with what I am calling “adoptionism.”

Because the system of power consistently rewards those who support the racial hierarchy through a false sense of acceptance, communities of color are encouraged to perpetuate a culture that oppresses them. Because of this cycle, internalized racism can have deep psychological effects on communities of color.

Now, I’m going to take a leap here and posit that there is a phenomenon that I will call “internalized adoptionism” that in many ways mirrors internalized racism.

If I take Amy Sun’s words and replace “internalized racism” with the concept of “internalized adoptionism,” we have a perfect description of what my experience has been like as an “undercover adoptee.”

Internalized adoptionism is the process where adoptees and original families develop beliefs and behaviors that collude or support the institution of adoption. Internalized adoptionism is a form of systematic oppression where people and communities affected by adoption unconsciously support the adoption machine and industry, which is built upon White privilege and power, White supremacy/superiority, and White American (and White European) colonialism.

Because the system of power consistently rewards those who support the adoption hierarchy through a false sense of acceptance, individuals affected by adoption (i.e., adoptees, original families) are encouraged to perpetuate a culture that oppresses them. Because of this cycle, internalized adoptionism can have deep psychological effects on individuals and communities directly affected by adoption, primarily including adoptees and original families.

Furthermore, in my own words, I would add that internalized adoptionism, particularly in the case of transracial adoption, is intertwined with internalized racism.

For the first 3 decades of my life, I was a poster child for adoption, and more specifically for transnational and transracial adoption. My support and adulation of transracial adoption in large part relied on the internalized assumption that not only was I inferior due to both being adopted [not wanted] and Asian [not White], but that my family and country of origin were also inferior because neither were White nor American.


By internalizing the belief that I, along with my origins, were ultimately "unworthy" and "less" due to my adopted and non-White status, it required that I be grateful and laudatory of my adoption and the practice of adoption as a whole. Otherwise, I would lose my position of favor and acceptance in the adoption hierarchy.

In other words, I better comply and do the happy song and dance lest I be cast back out to that depraved family and heathen country that not only forsook me but are like dirty rags in comparison to the radiant glory of White America.

But, over the years as my views about adoption have evolved from simple to complex, I have experienced my descent down the totem pole of the adoption hierarchy. I used to be a "golden child" loved by adoptive parents because I would always oblige in making them feel good about themselves and their adopted children. I was asked to speak at adoption events and churches. I was held up and praised by adoptive parents and the like as a model of an "adoptee who turned out well."

Well, let's just say I haven't been invited to speak at any church adoption events in years and nowadays adoptive parents tend to avoid me like I have a plague, or if they do engage with me, it's reluctantly and usually to try to prove that they're doing it right and that I'm mostly doing it wrong.

Again, much of my adoption experiences mirror my growing understanding of my experiences of race. Similarly, I used to be the token Asian that made all my White friends and family feel comfortable by assuaging any notion that they were racist or exclusive (in the same way that I was the token adoptee who made all my adoptive parent friends feel comfortable by reassuring them that they had done the right thing, that their children would "turn out well," and assuaging any notion that they had somehow contributed to adoption corruption).

But I wasn't really Asian to them, of course, and that's why they could tolerate my presence. I was like that sweet, alluring Twinkie--Yellow and Greasy on the outside, but White and Creamy on the inside. And I was happy to oblige, because accepting my assigned role as the Twinkie meant that I could at least avoid being consigned to the very bottom of the race totem pole. I knew deep down I wasn't really accepted but it allowed me to maintain the illusion that I "belonged." In the same, accepting my assigned role as "model adoptee" allowed me to feel accepted and loved rather than rejected and marginalized.

As an adoptee and Asian who had ultimately internalized the White American perspective on adoption and race, supporting adoption along with the perception of my racial inferiority were crucial to maintaining my fragile identity and my tenuous position on the totem pole. My internalized adoptionism and internalized racism were necessary mechanisms for the maintenance of my position within my family, church, and community.

Slowly yet surely, I have come to realize that modern adoption is built upon institutionalized racial, social, and economic inequality. Adoptionism, like racism, has evolved over the decades into a systematic and institutionalized way of life--so deeply embedded in American culture, society, and religion that very few question the status quo.


Instead, most folks simply view [international] adoption as the only and most ideal solution to impoverished and displaced families and children. Furthermore, adoptees and original parents who challenge and critique the status quo are often ostracized, marginalized, and treated as ungrateful dissidents who are unnecessarily and selfishly “rocking the boat.”

Now, you may be surprised to know, I, too, used to think the perspective I’m purporting was crazy and extremist. If you had talked with me 5-6 years ago about my adoption views, I would have sounded like Pollyanna. And I would have criticized and dismissed transracial adoptees discussing adoption in the context of White privilege and power as being negative and extreme--and even more so when I encountered adoptees discussing adoption as an extension of White American imperialism and colonialism.

But over the past decade as I have learned more and given myself the freedom to think critically and evaluate my own experiences, it’s so obvious to me the role that White privilege, power, imperialism, and colonialism play in international and transracial adoption. Yes, yes, sure--there are exceptions. But the majority of adoptive parents adopting internationally are White, and White Americans at that.

This is not just coincidence and it’s not because White Americans are simply more “altruistic and charitable” than others. It’s because there is a longstanding system built upon White privilege and power that has gone so awry that White people not only feel entitled to the Black and Brown and Yellow children of other nations, but they feel they are “saving” these children.


It’s a truly nightmarish combination of White privilege and White Saviorism embedded in a belief that they are doing “God’s work.”

I know this is crazy talk--even highly offensive--to some of you who are reading this. Some of you can’t even begin to wrap your mind around what I’m saying, in the same way that 6 years ago I too was unable to wrap my mind around these ideas--because I was still stuck in an adoptionist fog, blinded and weighed down by both internalized adoptionism and internalized racism.

But don’t fret. I have compiled a helpful list to help free your mind, which I will publish tomorrow in "(Part 2) Internalized Adoptionism: Are You an Adoptionist*?"

*Note: I realize that some may be opposed to yet another label such as "adoptionist." I, myself, felt conflicted over using the word "adoptionist" considering how loaded the word "racist" has become in our country. But for the purposes of discussing the topic of "internalized adoptionism," the word "adoptionist" seemed appropriate. Racism and adoptionism are both very real problems in America and having language with which to discuss the issues and potential solutions is necessary.
Posted by Mila