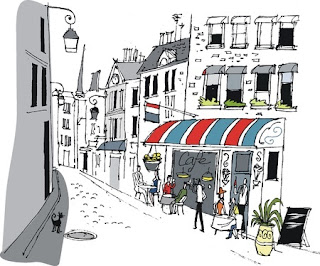 August 15th marked the one year anniversary of my birth mother’s death. When she passed away I thought I would feel something, some evidence of a ‘cellular connection’. A tingle? A shiver? Maybe I’ve just been watching too much Lifetime Television. But at 11pm in Austin, Texas/5am in England I was just getting home from a lovely dinner with my husband. All I felt was slightly too full and a bit tipsy.

I’d known that Sandy was going to die. Two months earlier she had revealed to my half-siblings that a year earlier she had been diagnosed with terminal cancer and given a year to live. My half-sister Ingrid and I had been in pretty much daily long-distance contact ever since. I played the role of big sister: listening, empathizing, letting her rant, and occasionally being the voice of reason.

It was the least I could do. Especially since Ingrid had just given me the answer to a question I’d been waiting 27 years for.

Ingrid and I hadn’t been in touch since 2009, but last May something compelled me to email her. We first met in 1986, when I was reunited with Sandy. She and my birth mother had been on my mind for reasons I couldn’t explain.

Ingrid and I aren’t much alike in appearance or character but we share a strong sense of doing the right thing. Which explains why, just before Sandy died, Ingrid decided that it was only fair for me to know the name of my birth father.

I’ve wanted this since I was 11 years old when I accidentally discovered my adoption while rooting through my mum’s desk looking for chocolate. The Church of England Children’s Society papers described Sandy as a ‘superior type of girl’. Not a bad start, but then I read this:

‘The baby’s father is of French nationality. Intelligent and ambitious, Sandra says he is a friendly man whose interests are reading and swimming.”

Knowing that he was French made sense of everything. It was why I loved French class at school and had been the standout performer as the Grandmother in La Petite Chaperon Rouge at age 8. It explained why I felt like an outsider. It gave me a secret to be proud of. My fantasy French father was called Jean-Luc or Jacques: he was cool, sophisticated, Gauloises-smoking, Left Bank-living and Sartre-reading. And when we met he would instantly recognize me by my sticky-out right ear and my pouty bottom lip.

When I reunited with Sandy in 1986 the best part was finding out from Ingrid that I’m the spit image of my father. Apparently Sandy hadn’t been sure who my father was (not as bad as it sounds, there was only a choice of two) until she saw me for the first time. I don’t think Ingrid was supposed to share this with me. It was the best news ever.

Meeting Sandy was a means to an end. I’ve always felt like a bit of a fraud in the adoption community for being so desperate to meet my birth father. Perhaps it’s because that Church of England report also said:

“The baby’s father wanted to marry Sandra but she decided against when she realized she was pregnant and the association was broken off.”

To me it was black and white. He wanted me, she wanted to give me up. So when we met and Sandy said she couldn’t (wouldn’t) tell me anything about my father there was no reason for us to keep in touch. I never contacted her again.

Just two weeks before she died Sandy wrote down the name of my father and Ingrid called, bursting to tell me. That’s when everything shifted. He wasn’t called Jean-Luc or Jacques or anything even close. His name was Dicran. Not exactly French. He’s Armenian. And just like that I’m ‘ne pas Francais’. We also discovered that Dicran didn’t want to marry Sandra and play happy families. He left when he found out she was pregnant.

I couldn’t understand why Sandy would lie to the Church of England Children’s Society. Until I finally realized that she didn’t write the report. They did. Regardless of what she told the Adoption Officer, they were going to present the best possible picture to the prospective adoptees and in 1966 a French father sounded better than Armenian. As for that line about the father wanting to marry the mother, I later discovered that mine wasn’t the only adoption report to falsely state this as fact. Why? To put more blame and shame on the mother?

Slowly, my clear and one-sided view of Sandy and of my adoptive parents unraveled. It exposed all the other sides of the prism. I had so many more questions for Sandy. I wanted to know what it was like to give me up, whether she had any regrets, if she ever wanted to get back in touch. I wondered about her experience of being an adoptee herself and finding her own birth mother. But by the time I figured all this out it was too late. I’m just grateful for whatever prompted me to get back in touch with Ingrid while Sandy was still alive.

I know that compared to many people in the US I am incredibly fortunate to have access to my birth certificate and that my adoptive parents kept all of my records, even if they kept them hidden. But I also know that regardless of country, closed adoptions can be full of secrets and lies, and having access to your records is far from a guarantee of truth

I still miss being French.

Maggie Gallant is a British-born comedy writer and performer now living in Austin, Texas. Adopted in 1966, Maggie was reunited with her birth mother in 1986. She has written a number of solo shows and her latest piece, Hot Dogs at the Eiffel Tower, covers the story of her adoption and search for her birth father. Maggie’s personal blog is at www.maggiegallant.com
Posted by The Lost Daughters