Two Memoirs by Claire Hitchon: Finding Heart Horse and The Wall of Secrets 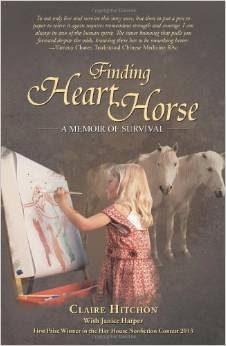 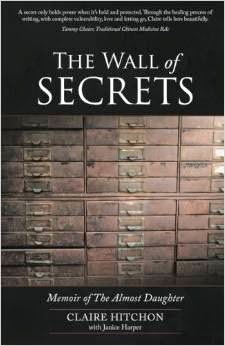 Those of us who speak out in favor of adoption reform are frequently accused of being angry and maladjusted due to having a bad adoption experience. We are dismissed as anomalies. Show us the happy adoptees who are on your side, many say. Most adoptees are happy about their situation, don’t you know? Most adoptions give children better lives than they would have had otherwise.

We feel compelled to make the case that there are so-called “happy adoptees” in our ranks who also recognize problems within the institution of adoption that need to be addressed. But what about those of us who did, in fact, have a bad adoption experience? Are we not entitled to speak? Do we not count in the big picture of adoption?

This was the thought I couldn’t shake as I read Claire Hitchon’s first memoir, Finding Heart Horse. Labeling her adoption experience as “bad” would be a gross understatement. She was placed with a physically and verbally abusive adoptive mother who clearly had no love for her and a meek adoptive father who did nothing to intervene on her behalf. To make matters worse, the family attempted to keep her adoption a secret, even from Claire herself.

Young Claire had a passion for horses and found escape from her daily abuse by creating an imaginary pet, the way some children turn to pretend friends for solace:

"I always wanted a horse . . . And so it was that when I was eight years old, I gave myself my own horse, my imaginary Heart Horse."


But not very long after she leaves home at fifteen, Claire makes her way to the rough streets of 1960s Toronto where she becomes entangled with another horse—Street Horse, her private name for heroin.

The title of the book refers to her quest to find a real Heart Horse, both literally and figuratively. The memoir chronicles her struggles on the streets with dangerous substances and relationships. All the while, Claire holds tight to a vision given to her as a child by a kind uncle—that out West, there was a place where wild horses roamed the land. She retreats to this place in her mind, imagining she will someday find her Heart Horse there, while in the real world she strives over and over again to create a home and family for herself.

Finding Heart Horse is a difficult book to read, because Claire’s early life was very painful. Yet, it is also a hopeful book about finding strength within oneself to keep trying, to never give up, even when there seems to be no one and nothing you can count on. Claire learned to count on herself and ultimately was rewarded. The tenacity of her spirit could not be broken.

Her first memoir left me with questions that I was pleased to have answered by her recently released second book, The Wall of Secrets. In addition to her imaginary pet Heart Horse, the young Claire also concealed her most private secrets in the wall of antique bank deposit drawers in her father’s library—the place where she would hide to escape from her cruel mother.

In her second memoir, all metaphorical drawers are opened, their secrets revealed. We learn how she discovered that she was adopted when she was eight and that her adoption was more complicated than even she had ever imagined. We see all the ways her adoptive mother continues to torment her into adulthood and how her adoptive father shrinks under the weight of his wife.

Despite the devastation of being virtually family-less, we watch Claire grow into a capable, caring woman who raises a daughter on her own and cares for her aging adoptive parents—even the mother who has been only vile toward her. None of the bad that’s been done to her can squelch Claire’s true, innate nature as a compassionate human being, though her ability to trust in other people’s love for her seems to be indelibly damaged. Claire is a good person, worthy to be loved, yet she struggles to see herself as worthy.

At the age of fifty, Claire resumes the search for her birth mother that she started and then abandoned when she was thirty. All of the drawers in her wall of secrets are finally emptied.

". . . I was standing in the same spot I’d been standing in just minutes before, but I’d become an entirely different person.


Along with her original identity, she finds the reason for physical ailments she has struggled with her entire life. Reunion does not mend all wounds—she calls herself the “almost daughter”—but it allows her to view herself and her difficult life with a new perspective.

"Life is not without suffering of some kind. It doesn’t mean that something is necessarily wrong. It just usually means we are clinging to the hope that things will be different."


Although all is not resolved, The Wall of Secrets concludes on a hopeful note. I wanted Claire to be okay, and by the end of her second memoir, I felt confident that she would be.

Of course, her being okay now does not—and should not—erase all the wrong that was done to her via her adoption. Nor does it mean that she no longer struggles or that she is always happy. None of us who have endured a difficult adoption experience should be expected to never struggle or to keep quiet about it. It is only by opening up all of these walls of secrets that we can understand where changes need to be made to ensure that every future adoption truly brings more good than bad to a child.

Claire Hitchon’s two memoirs describe myriad ways in which adoption affects a person throughout the entirety of her life. Rather than dismissing adoptees like Claire, we need to be listening and learning.

Note: The author provided copies of these manuscripts in exchange for reviews.