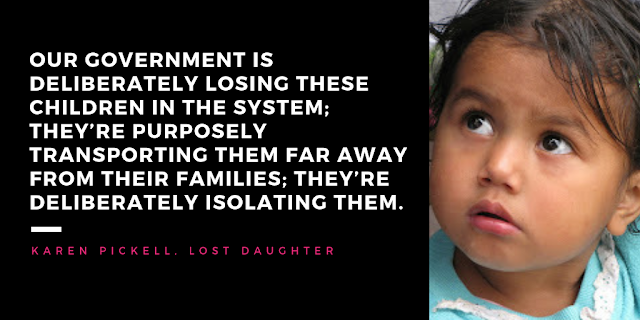 ROUNDTABLE: As adoptees, the writers of Lost Daughters share a history of separation from family. This gives us insight into the trauma of separation and influences our response to the separation of children and parents as a result of immigration policy. How have the Lost Daughters been affected by recent news coverage of this practice of family separation? What action steps do we recommend? What do we want others to understand about our own experience of separation and its relevance to this issue?

Karen Pickell: The first thing I remember thinking when I became aware of the children being separated from their parents at the border is, why are government officials not keeping better records of where the kids are and who their parents are? Why are the parents not informed of where their children have been taken? Why are they not permitted contact with their children? And then I began contemplating the possible answers: Our government is deliberately losing these children in the system; they’re purposely transporting them far away from their families; they’re deliberately isolating them.

It’s no secret to any of us familiar with the adoption machine that this is how it’s always been done. When I was born, I was removed from my mother because I was slated for adoption, even though it would be five weeks before she legally surrendered me. I was held in what was called an infant home for a total of three and a half months before my prospective adoptive parents were matched to me and took me to their home. Other potential adoptees were held in foster homes or in orphanages, sometimes for years, prior to their adoptions. I can’t help making comparisons between what these migrant children are experiencing and what adopted people have experienced for many decades. The severing of a child from her birth family is the first step on a grief journey that can last a lifetime.

As Mila pointed out, there are many other historical examples in which the humanity of certain categories of people was disregarded and children were stolen from their families. This is, indeed, who we are.

Children, particularly very young children, are often expected to adapt easily to new homes and new caregivers. Shower them with the fruits of privilege—comfortable homes, new clothes, abundant toys—and they are expected to forget they ever had another family at all. We adoptees know better. We know it is impossible to forget. The children who have been taken at our border are living in a horror movie conceived and directed by our own government, and we are complicit for having put criminals into power in the first place and for not holding our elected officials accountable.

I do not think this horror story will end without sustained action from millions of us around the country. We as a nation have previously accepted genocide, slavery, orphan trains, internment camps, the Baby Scoop, Indian child removal, and adoptions of paper orphans from all over the world. We tolerate mass disruption of families due to disproportionate incarceration as well as the confusion of poverty with neglect. I am not at all confident that enough of us will stand up against this latest atrocity. I hope I’ll be surprised.

What can average citizens, and particularly adoptees, do? Call or write your elected representatives at all levels of government. Speak up, make noise about what’s happening whenever and wherever you can. Challenge anyone in your life who finds it acceptable to kidnap children from their parents. Tell your own adoption story, including its pain, grief, and injustice. Donate time or money to organizations working directly with those coming here seeking safety. Reframe the conversation by rejecting language that dehumanizes migrants and immigrants (for example, they are not "illegals," they are families seeking asylum).

Attend a Families Belong Together event near you on Saturday, June 30. Follow the Facebook page Adoptees for Reunification for more ideas on how to help these vulnerable families.

I want to add two final thoughts pertaining directly to adoptees. It’s valid and important to point out the similarity between our experiences and what’s happening to these migrant children, but I hope we can do so in ways that don’t detract from the priority of helping these families who are in desperate need at this very moment. And lastly, but importantly, don’t give energy to anyone who criticizes how you respond to this situation. Each of us is dealing with seeing and hearing and reading about this trauma in our own way and in our own time. No effort you make is too small, and taking breaks to practice self-care by experiencing joy in your own life will help you be more effective in the long run. Let’s be kind to each other.

Mila Konomos: Reading through Karen’s response prompted me to reflect a bit more personally about how these issues hit so close to home for me on so many levels.

There is of course, as already addressed, the experience as an adoptee of being separated from our families. We know the long-term psychological trauma that results from being forcibly removed from our mothers and origins. Watching and reading about these families being ripped apart brings that trauma to the surface again. I have found myself cycling through loss and grief, depression and anxiety. I have struggled with feeling paralyzed and re-traumatized by the images and stories of children being torn away from their mothers and loved ones. I have wept and cried on a daily basis. And as I watch my own children play, I cannot help but imagine the terror and devastation that both my children and I would experience were we to be forced apart--because I have already experienced that terror and devastation as an adoptee.

But I also want to add to the conversation the way this zero tolerance/family separation policy is experienced by an adoptee who is an immigrant of color.

As a transracial, transnational adoptee, I am also an (involuntary) immigrant of color, who is a naturalized citizen. Amidst the ongoing and increasing vitriolic anti-immigrant rhetoric and policies targeting immigrant families of color in particular, it is not a stretch to imagine myself being forcibly separated from my children, not only because I know what it feels like to be separated from one’s family, but also because I am an immigrant whose appearance is interpreted as a “perpetual foreigner.”

I know that for some the consequences of these policies may at times feel somewhat abstract and far off, because they do not directly affect your lives and families. But for someone who is a brown immigrant and naturalized citizen brought here through transracial, transnational adoption, the current policies and practices are terrifying and horrific, not simply because I can relate to the emotion of it, but because my face labels me among those that these policies and rhetoric target.

The consequences of this hysteria are not abstract or faroff. They are very real. They are very personal. They are here--in my home, with my children, in my daily life. When I am driving and a Border Patrol or police vehicle pulls up alongside my car, my heart rate jumps and my palms start sweating and all I can think about is my kids riding in the back seat and that I hope the agent in the car keeps driving. In the event that I do get pulled over, my husband actually recently asked me to start carrying my passport, particularly when driving in certain counties of our state, for fear that my driver’s license will not be sufficient proof of my citizenship. Because citizens who look like me get detained. My children keep trying to clarify where I was born and what it means to be a citizen.

These are some of the ways that my family and I are being affected by the zero tolerance/family separation policy emotionally and in our everyday lives.

And with each day that goes by with increasingly extreme anti-immigrant rhetoric and policies permitted to thrive, it becomes less and less of a stretch that one day I myself may face being separated from my own children through detainment or deportation, simply for the color of my skin and the “foreign” origin of my body.

Von: I'm irate, outraged, sad and hoping it can be stopped.

Rebecca Hawkes: I have been struggling. Even though my domestic infant adoption story differs from the current situation in many ways, even though I ended up in a good adoptive situation, have good reunions with both parents, and have spent years working through my adoption issues to reach a place of peace and acceptance regarding my own separation and adoption story, current events are affecting my nervous system in a very powerful way. I keep finding myself opening and closing articles because I am too triggered by them to keep reading. I can only imagine what it is like for those who have the additional factors of immigration, race, or citizenship status as part of the personal experience connecting them to this issue. To be honest, I want to ignore this whole thing. I want to bury my head in the sand, to protect myself. But I can't. Yes, it is true that this is far from the first time our nation has been involved in separation of families, but this is the time when I have to choose which side of history to be on. I can't choose silence or inaction.

I'm trying to focus on action steps. (In addition to resources mentioned above and in part one of this series, I'll add www.IReallyDoCare.com.) I'm also thinking about ways that we as adoptees must push back against the foster-care/adoption "solution" that is already beginning to emerge.

This weekend, I encountered the following in an blog post by adoptee and educator Dr. John Raible:


One thing I'm clear about: The proper response to the current tragedy is NOT swooping in to "rescue" kids, as North Americans are prone to do, for example, after disaster strikes. Adoption industry professionals should take a hands-off approach and curb their self-serving child-snatching tendencies.

Predictably, at least one cable news anchor, Mika Brezinsky, voiced the naivete of many well-meaning Americans, when she said she is thinking about fostering one of the refugee kids, as if that will solve the crisis. Keep in mind how eerily reminiscent of the Native child-snatching 'maternalists' (documented by Margaret Jacobs) such a naive response actually sounds."

As adoptees, we at Lost Daughters have been pushing back against the misguided "adoption fixes everything" narrative for years. As much as I want to be done talking about adoption and separation issues, I can't sit quietly as history repeats itself and the trauma cycle rolls on, with devastating effect for a new generation of children.

Adoption and Child Separation at the Border
Posted by Rebecca Hawkes